What does Paco mean?

[ 2 syll. pa-co, pac-o ] The baby boy name Paco is pronounced as PAE-Kow †. Paco is mainly used in Spanish, and it is of Italian, Germanic, Native American, and Latin origin. From Native American roots, its meaning is bald eagle.

Paco is also a variant form of the English and German name Frank in the Spanish language.

Paco is also a variant form of the English, French, and German name Pascal in the Spanish language.

The names Packo, Pacoro, Pacorro, Pako, and Panchito are variant forms of Paco.

Another variant of the name is the Spanish diminutive form Paquito.

Paco is seldom used as a baby name for boys. It is not in the top 1000 names. In 2018, out of the group of boy names directly related to Paco, Francisco was the most commonly used. 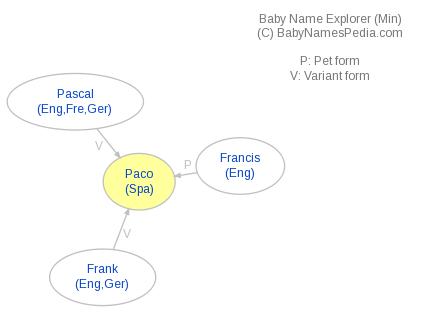