What does Paige mean?

[ 1 syll. pai-ge, pa-ige ] The baby girl name Paige is also used as a boy name, though it is far more popular for girls. It is pronounced as PEY-JH †.

Paige has its origins in the Middle English language and it is used largely in English. The first name is derived from the surname, which is itself from the ordinary English word page (meaning 'servant, helper'). This word is in turn derived via Old French and Italian from the Greek 'paidion'. In medieval times, pages were male servants to lords, but the modern use of the name is almost exclusively for girls, for reasons that are unclear. The popularity of the American actress Janis Paige (Donna Mae Tjaden, 1922-) may have influenced the adoption of the first name for girls.

Paige's origin is Old Greek. It is derived from the word paidion which is of the meaning 'little boy'.

In addition, Paige is a form of the English Page.

Paige is popular as a baby girl name. The name increased in popularity from the 1950s up to the 1990s. Its usage peaked modestly in 1995 with 0.298% of baby girls being named Paige. It had a ranking of #58 then. The baby name has slipped in popularity since then. In 2018, it ranked at #213 with a usage of 0.078%, but it was nevertheless the most widely used among all girl names in its family. 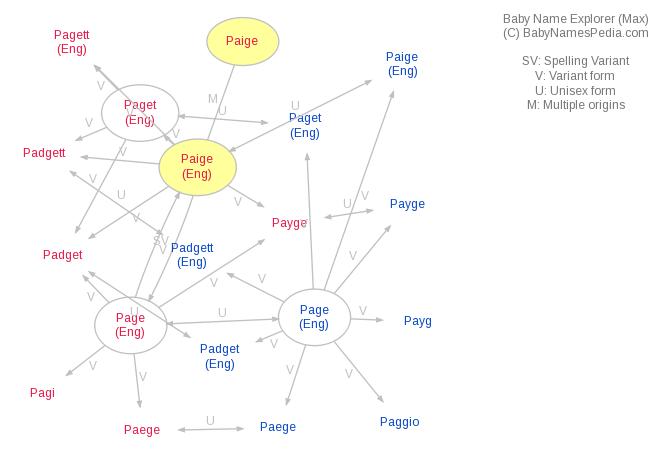