What does Pascal mean?

[ 2 syll. pas-cal, pa-sc-al ] The baby boy name Pascal is pronounced as PaeS-KAEL in French †. Pascal is used chiefly in the English, French, and German languages, and its origin is Latin. The name's meaning is of Easter. It is from the elements 'Pascha' meaning Easter ; 'pesach' Passover. The first name is derived from Paschalis (Latin), which is itself from the Latin Pascha, and ultimately of the Hebrew 'pesach'. The name was previously bestowed mainly for boys born during the Easter period, which coincides closely in date with the earlier Hebrew holiday of Passover. The name was borne by two minor medieval popes. The popularity of the name was later given a boost from the fame of the French philosopher, physicist, and mathematician Blaise Pascal (1623-1662). The name has been used chiefly by Roman Catholics. The name Pascale (English and French) is the female form of Pascal.

Pascal is uncommon as a baby name for boys. At the height of its usage in 1910, 0.007% of baby boys were given the name Pascal. It ranked at #851 then. The baby name has since experienced a loss in popularity, and is today of very modest use. Within all boy names in its group, Pascal was nonetheless the most regularly used in 2018. 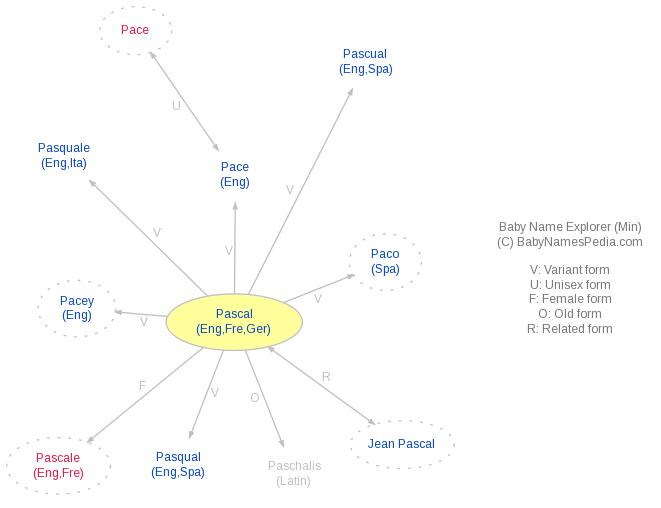