What does Patricia mean?

[ 3 syll. pa-tri-cia, pat-ric-ia ] The baby girl name Patricia is also used as a boy name, though it is far more popular for girls. It is pronounced Pah-TRIH-SH-ah in English, Paa-TRIY-TSiy-aa in German, Paa-TRIY-THYaa in Spanish, or Paa-TRIY-SYaa in Spanish-Latin American †. Patricia is of Latin origin. It is used mainly in English, Portuguese, and Spanish. The meaning of Patricia is 'noblewoman'. It is derived from the word patricius with the meaning 'of noble class'. Patricia is the feminine equivalent of the English Pat and the English, French, Gaelic, German, and Irish Patrick.

Patricia is an all-time favorite. Currently it is still somewhat popular as a baby girl name, but not to the degree it was previously. At the height of its usage in 1951, 3.057% of baby girls were named Patricia. It was #3 in rank then. The baby name has seen a marked drop in frequency since then, and is used only on a modest scale now. In 2018, it ranked at #913 with a usage of 0.016%. Within the family of girl names directly related to Patricia, Peyton was the most popular. It was 10 times more widely used than Patricia in 2018. Patricia has in the last century been primarily given to baby girls. In 1970, 198 times more baby girls than boys were given the name Patricia. 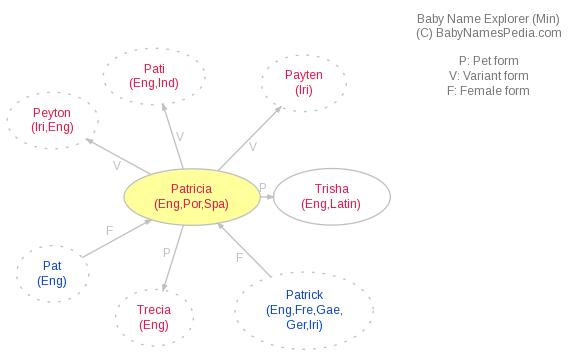