What does Patrick mean?

[ 2 syll. pa-tric(k), pat-ri-ck ] The baby boy name Patrick is pronounced as PAET-RihK in English, PaeT-RIYK in French, or PAAT-RihK in German †. Patrick is used predominantly in the English, French, Gaelic, German, and Irish languages, and it is derived from Latin origins. The name is of the meaning nobleman. Patricius (Latin) is an older form of Patrick. The name was borne by Saint Patrick (389-461), the patron saint of Ireland. He was born in England and captured to Ireland as a slave boy. He later escaped, but eventually returned to Ireland as a missionary; through his works, almost all in Ireland were converted to Christianity. His name appeared as Patricius in his Latin autobiography, but the name may ultimately be of a lost Celtic origin, although it is often taken to derive from the Latin 'patricius'.

In Ireland, the name was initially considered too sacred to be bestowed on children; therefore, it was first adopted in the Scottish Highlands, as well as in England, where it was taken up in the 12th century. The Irish took up the name later, and by the 18th century, the name in its various Irish forms has become widespread in the country. Modern use of the name still retains an Irish flavor, to the extent that the term 'Paddy', used since the 19th century, remains a byname for Irish persons in general. The name Patricia (English, Portuguese, and Spanish) is the female version of Patrick.

The name Patrick is used to a great extent; it has 54 variants that are used in English and other languages. Variants used in English include Packy, Paddie, Padraigh, Padric, Pate, Patec, Pateck, Patrece, Patreece, Patric (used in French and Irish too), Patrice (used in French too), Patricia, Patrickk, Patricus, Patrido, Patrique, Patrício (used in Portuguese and Spanish too), Pats, Patten, Patterson, Pattrick, Patty, and Trick. Other English variants include the short form Pat, and the pet forms Packey, Paddy (used in Irish too), Patsy, Patton, and Pink.

Patrick is a classic favorite. Today it is still popular as a baby name for boys, though not to the extent it was previously. The name's popularity rose from the 1920s up to the 1960s. At the height of its usage in 1968, 0.735% of baby boys were given the name Patrick. Its ranking then was #30. The baby name has since experienced a fall in popularity. In 2018, its usage was only 0.109% and its ranking #189, but it was nonetheless the most popular within all boy names in its group. In 2018, Patrick was more commonly used than the next most popular name, Paxton, by 26% . 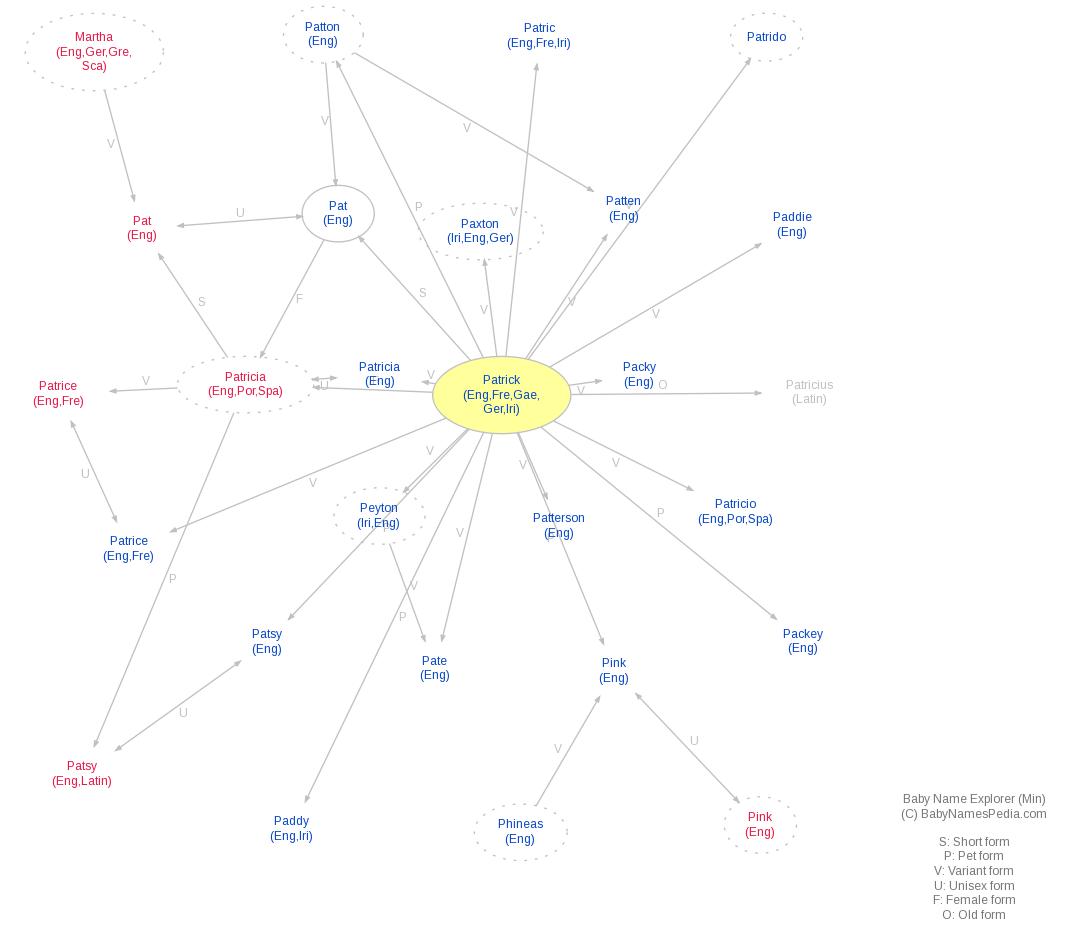