What does Paul mean?

[ 1 syll. pau(l), pa-ul ] The baby boy name Paul is pronounced as PAOL (English), POWL (French), or PAWL (German) †. Paul is used predominantly in the Dutch, English, French, and German languages, and it is derived from Latin origins. A biblical name, it is derived from the element 'paulus' which means little, humble. Paulus (Latin) is an old form of Paul. Paulus was originally a Roman nickname, but it soon evolved into a given name after the Classical era. The name was borne in the Bible by Paul, known as the 'Apostle to the Gentiles'; before he converted to Christianity, his name was Saul. Together with Peter, he is considered the most notable of early Christian missionaries, and numerous books in the New Testament were written by him. The name has thus been traditionally popular with Christians; it was already in use by English speakers prior to the Norman Conquest. The name has been borne by six popes. The name Paula (English, French, German, Polish, and Spanish) is the female version of Paul.

What are the Variant Forms of Paul?

The name Paul is used to a great extent; it has 67 variants that are used in English and other languages. Variants used in English include Paley, Paol, Pascha, Pashenka, Pasko, Pauel, Paulia, Paulis, Paull, Paulle, Paulot, Paulsen, Paulson, Paulus, Pauly, Paulys, Paúl, Pavlof, Pavlos, Pavlushka, Pol (used in Irish and Scandinavian too), Poll, Pollard, and Powell. The pet form Paulie is another English variant.

Paul is a classic favorite. Today it is still popular as a baby name for boys, though not to the extent it was before. At the peak of its usage in 1964, 1.326% of baby boys were given the name Paul. Its ranking then was #16. The baby name has since suffered a substantial fall in popularity, and is currently of occasional use. In 2018, its usage was only 0.084% and its ranking #234, but it was nonetheless the most popular out of all boy names in its group. In 2018, Paul was twice as popular as the subsequent ranked name, Pablo. The name Paul has predominantly been a baby boy name, though it has also been given to girls in the past century. In 1969, baby boys named Paul outnumbered girls by 164 times. 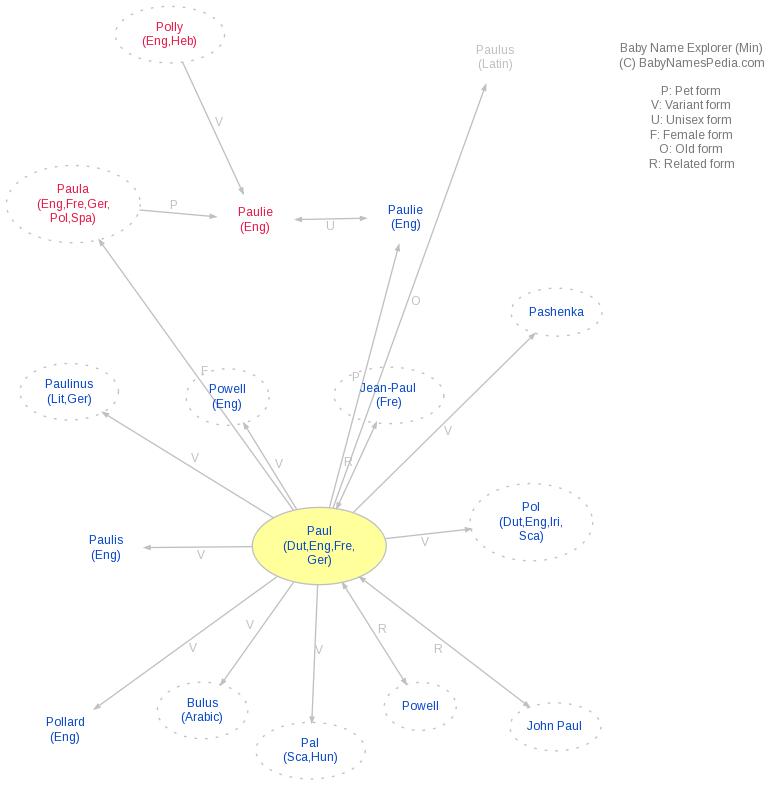