What does Pearl mean?

Pearl is of English origin. It is used mainly in English and Irish. It is from pearl ; perle which means 'pearl' ; perla 'pearl'. The first name is derived from the English jewel name, which is itself of the Old French perle and ultimately from the Latin root word perla. It was coined in the 19th century amidst the vogue for jewel names. See Pearl for more information.

Pearl is a widely used name; it has 30 forms that are used in English and foreign languages. English forms of the name include Jearl, Pearla, Pearlea, Pearleah, Pearlee, Pearleen, Pearleigh, Pearlena, Pearlene, Pearlette, Pearley, Pearli, Pearlina, Pearline, Pearlita, Pearlyn, Perl, Perla (used in Italian and Spanish too), Perlette, Perley, Perlina, Perline, Perlline, and Ptarlina. Other English forms include the familiar forms Pearlie, Pearly, and Perlie, and the spelling variant Pearle. Perle (French and Yiddish) is a form of Pearl that is used in foreign languages. The familiar form Perlita (Spanish) is another foreign variant.

Pearl has its origins in the Hebrew language and it is used largely in English. An old form of the name is Perle (Hebrew). Among Jews, the name has long been used as an Anglicized form of the Yiddish Perle, itself a diminutive byname of Margaret.

Pearl is an all-time favorite. Today it is still rather popular as a baby girl name, but to a lesser degree than it was before. In 1900, 0.790% of baby girls were named Pearl. It was #24 in rank then. The baby name has suffered a substantial drop in frequency since then, and in recent times it is of only very light use. In 2018, it ranked at #647 with a usage of 0.025%, but it was nevertheless the most popular out of all girl names in its family. Pearl was used 57% more than the next ranked name, Perla, in 2018. 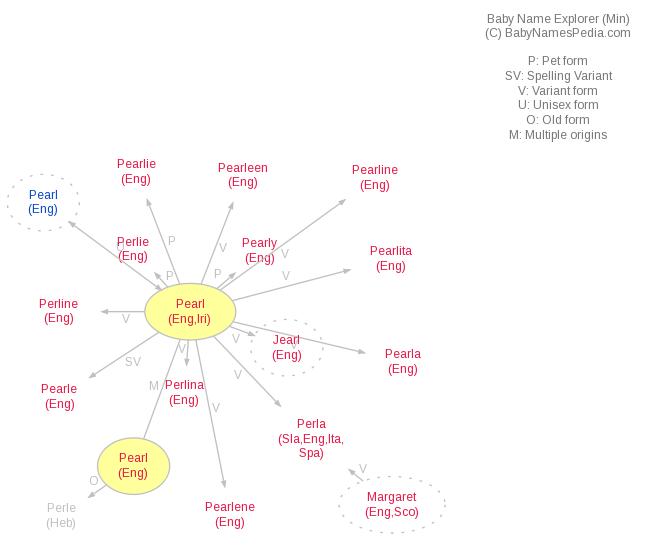