Per - Meaning of Per

What does Per mean?

[ 1 syll. per, pe-r ] The baby boy name Per is pronounced PER †. Per's origin is Old English and Old Greek, and its use, Dutch, German, and Scandinavian.

Per is a variant transcription of Perry (English and French).

Pelle (Scandinavian pet form) and Peer (Dutch and German variant spelling) are forms of Per.

Per is unusual as a baby name for boys. It is not listed in the top 1000 names. In 2018, within the group of boy names directly linked to Per, Peter was the most commonly used.

More about famous people named Per: 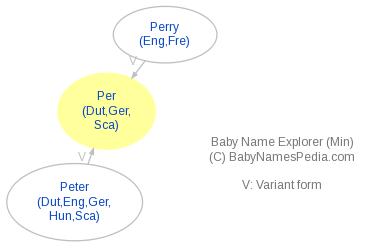