What does Percival mean?

[ 3 syll. per-ci-val, pe-rciv-al ] The baby boy name Percival is pronounced in English as PAHR-Sih-VahL †. Percival's language of origin is Old French, and it is predominantly used in English and French. Percival is of the meaning 'one who pierces the valley; hard steel'. The name was borne in Arthurian legend, and it was likely to have been first invented by the late 12th-century French poet Chrétien de Troyes, who spelt the name as Perceval (Old French), from the Old French percer and val. According to Chrétien and Wolfram von Eschenbach (1170-1220), who spelt the name as Parzifal (Germanic), the character was the most innocent of all the knights of the Round Table, and thus was the one who found the Holy Grail, although later legends identified Sir Galahad as the hero. Other theories suggest a derivation from the Normandy place name Percheval (Old French). The name could also be ultimately from Peredur (Celtic), which means 'hard steel', altered through association with Old French elements.

Percival has 17 variant forms that are used in English and foreign languages. English variant forms include Parsafal, Parsefal, Perc, Perceval, Percevall, Percey, Percivale, Percivall, Percyval, Percyvel, Percyvelle, Peredur, and Purcell. Other English variants include the contracted forms Perce and Percy (used in French, and Latin too). Variant forms of Percival used in foreign languages include the German Parsifal and the German Parzival.

Percival is an unusual baby name for boys. Its usage peaked modestly in 1901 with 0.006% of baby boys being named Percival. Its ranking then was #925. The baby name has since experienced a decline in popularity, and is used only on an infrequent scale today. Among all boy names in its group, Percival was nevertheless the most popular in 2018. 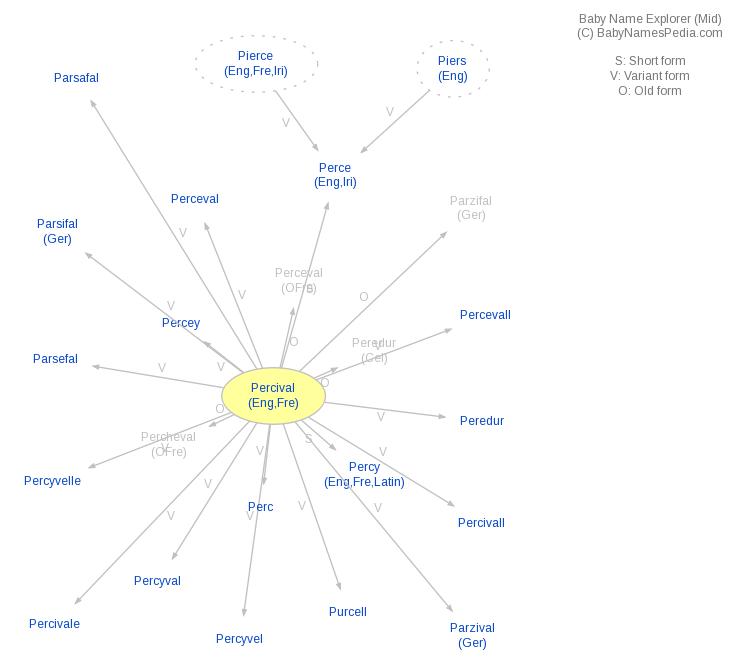