What does Peter mean?

[ 2 syll. pe-ter, pet-er ] The baby boy name Peter is pronounced as PIY-TahR in English, PEY-TahR in Dutch, or PEH-TehR in German and Slovak †. Peter is used chiefly in the Dutch, English, German, Hungarian, and Scandinavian languages, and its origin is Old Greek. Cephas (Aramaic), Cephus (Aramaic), Petros (Old Greek), and Petrus (Latin) are older forms of Peter. The name is derived via the Latin form Petrus, from the Old Greek Petros, itself of the element 'petros' (meaning rock, stone). The name was borne by Peter, the most notable of the apostles; before he was given the name by Jesus, possibly to distinguish him from another apostle similarly named, he was known as Simon. The original form of the name given to him was the Aramaic Cephas or Kephas, and in the Bible Jesus alluded to the meaning that Peter shall be the 'rock' on which the church would be built.

The name was popular in the Middle Ages, and was borne by several saints and popes. In the Domesday Book, the name was recorded as the Latin Petrus; the modern form Peter became widely used by the 14th century. The name declined in popularity after the Reformation, due to its association with the papacy. It later saw a revival at the start of the 20th century, from the fictional main character Peter Rabbit in Beatrix Potter's The Tale of Peter Rabbit (1902) and the subsequent books in the popular series. Another fictional character which boosted the adoption of the name was J.M. Barrie's Peter Pan, which debuted in the stage play Peter Pan, or The Boy Who Wouldn't Grow Up (1904), and later appeared in the novel Peter and Wendy (1911). The name Petra (English, German, Hungarian, Polish, and Spanish) and the name Petronia (German) are the female forms of Peter.

What are the Variant Forms of Peter?

Peter is a classic favorite. At present it is still popular as a baby name for boys, though it was in more widespread use previously. At the height of its usage in 1957, 0.529% of baby boys were given the name Peter. It ranked at #37 then. The baby name has since experienced a fall in popularity, and it is of occasional use in recent years. In 2018, its usage was only 0.094% and its ranking #211, but it was nonetheless the most popular within all boy names in its group. In 2018, Peter was twice as popular as the next ranked name, Pedro. 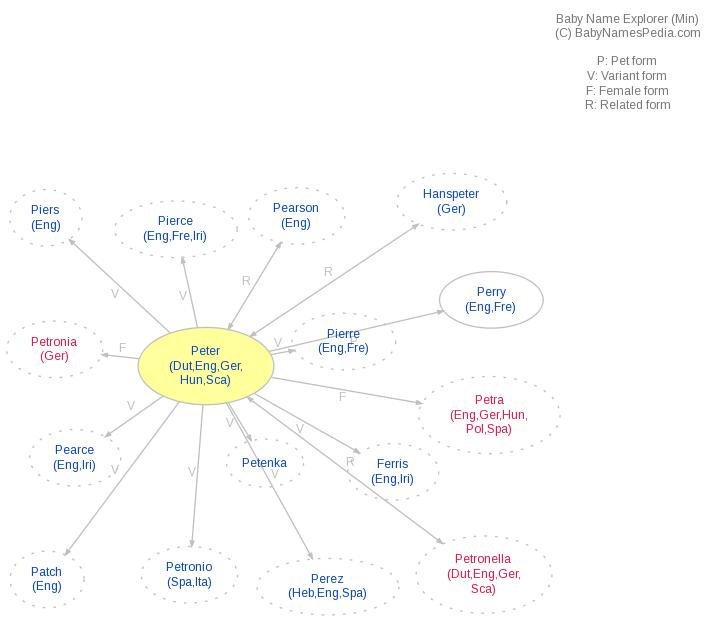