What does Petronio mean?

[ 4 syll. pe-tro-nio, pet-ron-io ] The baby boy name Petronio is pronounced as PEHTROWNiyow †. Petronio is used predominantly in the Spanish and Italian languages, and it is derived from Old Greek and Latin origins. From Latin roots, its meaning is from a rocky place; bumpkin - in this context, Petronio can be used in the Italian language. The name is of uncertain origin; it could be from Roman surname Petronius (Latin), itself of the name Petruna (Etrusk) and associated with the Old Greek 'petros' (meaning rock, stone), possibly originating as a byname for someone living in a rocky place, or else it could be from the Latin 'petro' in reference to a country bumpkin.

In addition, Petronio is a variant (Spanish) of the name Peter (Dutch, English, German, Hungarian, and Scandinavian).

The name Petronia (German) is the female version of Petronio.

Petronio is not regularly used as a baby name for boys. It is not listed in the top 1000 names. Out of the group of boy names directly linked to Petronio, Peter was the most commonly used in 2018. 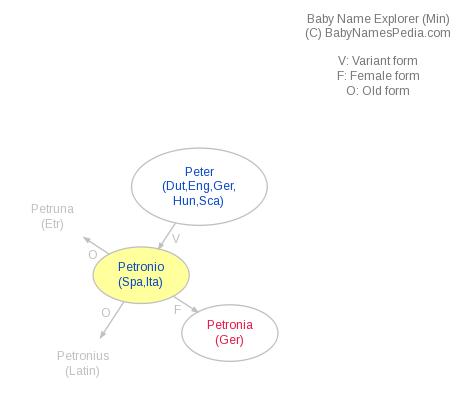