What does Peyton mean?

[ 2 syll. pey-ton, pe-yt-on ] The baby girl name Peyton is also used as a boy name, though it is more frequently a girl name. It is pronounced as PEY-TahN †. Peyton is of Latin and Old English origin. It is used mainly in Irish and English. From Old English roots, its meaning is 'farm of Paega; peacock town' - in this context, Peyton can be used in the English language. It is derived from pawa which means 'peacock' ; tun 'town, settlement, homestead'. Interestingly, the name grew in popularity at the same time as the release of the film The Hand that Rocks the Cradle (1992), in which the evil nanny has the alias Peyton Flanders. See Peyton for more information.

In addition, Peyton is an Irish form of the English, Portuguese, and Spanish Patricia.

Peyton is popular as a baby girl name. The name has been growing in popularity since the 1990s; prior to that, it was of only very modest use. Its usage peaked in 2009 with 0.263% of baby girls being named Peyton. It had a ranking of #43 then. In 2018, it ranked at #101 with a usage of 0.157%, and it was the most popular among all girl names in its family. Peyton was twice as popular as the 2nd most popular name, Payton, in 2018. Though there were times from 1989 to 2007 when more boys than baby girls were given the name Peyton, the name is today more frequently used for baby girls. There were 3 times more baby girls than boys who were named Peyton in 2017. 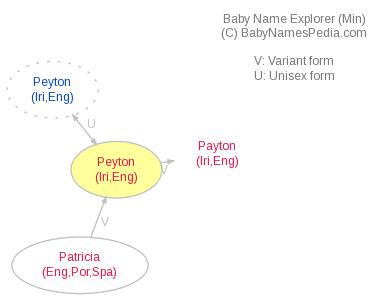