What does Peyton mean?

[ 2 syll. pey-ton, pe-yt-on ] The baby boy name Peyton is also used as a girl name, and more commonly so. Its pronunciation is PEY-TahN †. Peyton is an Irish and English name of Latin, Middle English, and Old English origin. From Old English roots, its meaning is farm of Paega; peacock town - in this context, Peyton can be used in the English language. The first name is derived from the surname, which is itself from a place name from Suffolk, England. The place name could mean 'farm of Paega' in reference to an Old English name of unknown meaning, or else 'peacock town' from the elements 'pawa' and 'tun' (meaning town, settlement, homestead). The popularity of the name in America has been boosted by the primetime TV series Peyton Place (1960s), which was adapted from the Grace Metalious novel (1956) of the same name. See Peyton for more information.

In addition, Peyton is a variant of the name Patrick (English, French, Gaelic, German, and Irish) in the Irish language.

Peyton is also a variant of the name Patton (English).

Peyton is fairly popular as a baby name for boys. The name's popularity rose from the 1980s up to the 2000s; before that, it was of irregular use only. At the modest height of its usage in 2007, 0.153% of baby boys were given the name Peyton. Its ranking then was #125. The baby name has since fallen in popularity. In 2018, its usage was 0.041% and its ranking #401, but it was nonetheless the 2nd most popular after Patrick, within all boy names in its group. In 2018, the name was thrice as popular as Peyton. There were times from 1989 to 2007 that the name Peyton was given more often to boys, but it is more popular as a girl name today. In 2017, girls named Peyton outnumbered boys by 3 times. 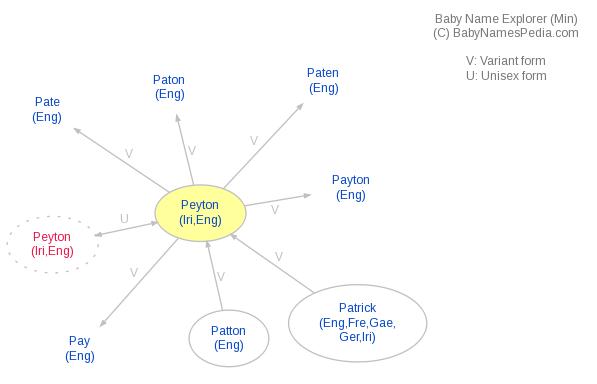