What does Philip mean?

[ 2 syll. (p)hi-lip, ph-il-ip ] The baby boy name Philip is pronounced as FIHL-ihP in English or FIY-LihP in Dutch †. Philip is largely used in the English language and its origin is Old Greek. The name is of the meaning lover of horses, friend of horses. Philippos (Old Greek) and Philippus (Latin) are older forms of Philip. The name is derived from the Greek Philippos, which is of the Greek 'philein' or 'philos' combined with 'hippos', which is itself from an ancient Indoeuropean root word 'ekwo'.

The name was given to Macedonian kings who built up a cavalry and therefore were known as friends of horses; it was most notably borne by the father of Alexander the Great, Philip II of Macedonia (382-336 BC). It was also borne by one of the apostles in the Bible, and later by several other early saints. The name was used as a unisex name in medieval times. As a royalty name, it was borne by several kings of France, Castille and Spain. Its popularity among English speakers declined in the 16th century from association with Philip II of Spain (1527-1598), who led an invasion of England. The name later saw a revival in the 19th century. The name is sometimes derived from the English surname Phillips, resulting in the variant with the '-ll-' spelling. The name Philippa (English and German) is the female equivalent of Philip.

The name Philip is used to a great extent; it has 50 variants that are used in English and other languages. Variants used in English include Feidhlim, Felipo (used in Spanish as well), Phelps, Philipi, Philippo, Philips, Phill, Phillipp, Phillips, Phillp, Philp, Phippin, Pippo, and Piripi. Other English forms include the contractions Flip, Phil, and Pip, the pet form Philly, and the variant spellings Fillip and Phillip.

Philip is a classic favorite. Currently it is still fairly popular as a baby name for boys, though to a lesser extent than it was previously. At the modest height of its usage in 1948, 0.346% of baby boys were given the name Philip. Its ranking then was #54. The baby name has since declined in popularity, and is of occasional use in recent years. In 2018, its usage was only 0.035% and its ranking #439, but it was nonetheless the most popular within all boy names in its group. In 2018, Philip was more regularly used than the next most popular name, Phillip, by 3.509% . 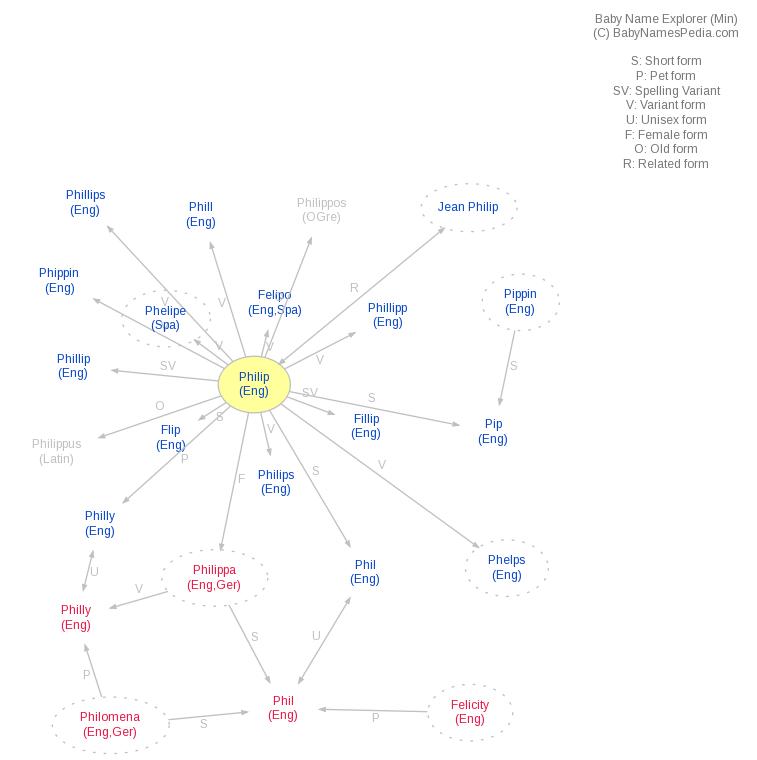