What does Philomena mean?

[ 4 syll. (p)hi-lo-me-na, ph-ilom-ena ] The baby girl name Philomena is pronounced in English as FihL-ah-MIYN-ah †. Philomena is of Old Greek origin. It is used mainly in English and German. The name Philomena means 'strongly beloved'. Original forms of the name include Philomenes (Old Greek) and Philomenus (Latin). The name is derived from the Greek philein or philos combined with menos. It was borne by Saint Philomena (291-304), known as a young Greek princess and martyr; her remains were discovered at San Severino in 1527. The relics of another Saint Philomena was unearthed in Rome in 1802, leading to a cult following and the subsequent popularity of the name in Italy. The popularity of the cult and the name declined when it was later realized that the Latin inscription on the tomb, 'Filumena pax tecum' meaning 'peace be with you, beloved', did not actually refer to the name of the saint.

Philomena is unusual as a baby girl name. Its usage peaked modestly in 1915 with 0.028% of baby girls being named Philomena. It had a ranking of #355 then. The baby name has markedly dropped in popularity since then, and is currently used only on an infrequent scale. Among all girl names in its family, Philomena was nevertheless the most widely used in 2018. 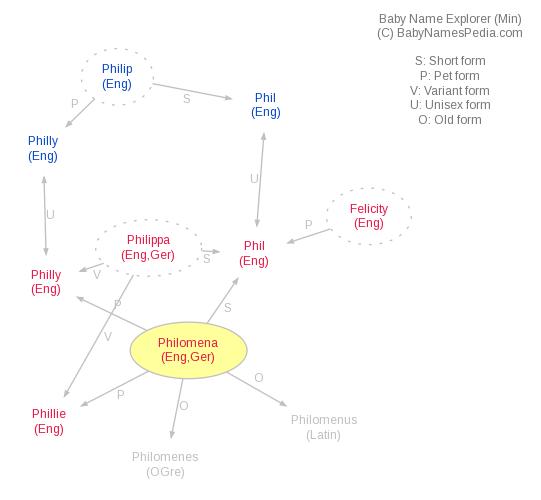