What does Pierre mean?

[ 2 syll. pier-re, pi-e-rre ] The baby boy name Pierre is pronounced as Piheh-R †. Pierre is used predominantly in the English and French languages, and it is derived from Old Greek origins.

In addition, Pierre is a variant (English and French) of the name Peter (Dutch, English, German, Hungarian, and Scandinavian).

The name Perrine (French) and the name Pierrette (French) are the female versions of Pierre.

Pierre has 16 variants that are used in English and other languages. Variants used in English include Peirre, Piere, Pierel, Pierele, Pierell, Pierelle, Pierrel, Pierrele, Pierrell, Pierrelle, Pierrot, Pyere, and Pyerre. The diminutive form Perrin (used in French as well) is another English variant. A variant of Pierre in other languages is Pierre-Alexandre (French). Another foreign variant is the diminutive form Pierrick (Breton and French).

The origin and thus the meaning of Pierre is inherited by all variant forms.

Pierre is rare as a baby name for boys. At the peak of its usage in 1986, 0.024% of baby boys were given the name Pierre. It ranked at #389 then. The baby name has since markedly fallen in popularity, and is currently of very modest use. Out of the group of boy names directly linked to Pierre, Peter was the most regularly used in 2018. 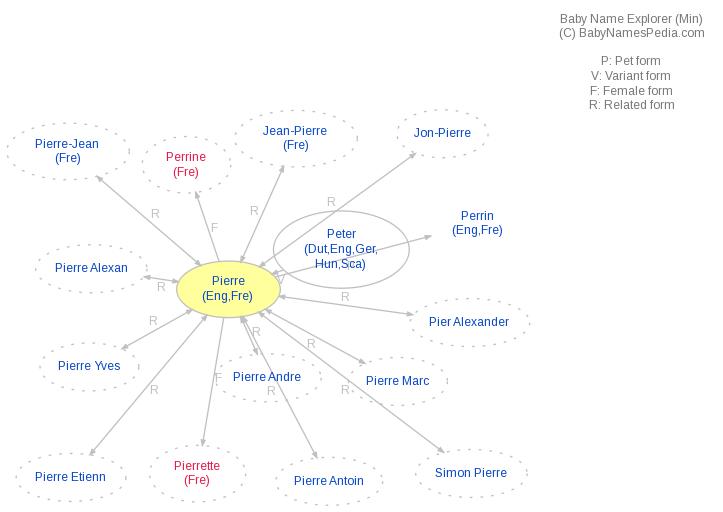