What does Priscilla mean?

[ 3 syll. pris-cil-la, pr-isci-lla ] The baby girl name Priscilla is pronounced PRih-SIHL-ah (English) †. Priscilla has its origins in the Latin language. It is used largely in English, German, and Italian. It is a biblical name from the word priscus which is of the meaning 'ancient, old'. The first name is derived as a feminine diminutive of the Roman family name Priscus (Latin). The name was probably first bestowed to wish the bearer a long life. The name Prisca and Priscilla appear in the New Testament of the Bible, probably in reference to the same person, a woman companion whom Paul stayed with at Corinth. The name was also borne by the 1st century Saint Prisca, a young woman martyred under Claudius II. In literature, it first appeared in Edmund Spenser's The Faerie Queen (1596). The name was widely adopted by English Puritans in the 17th century, and it saw a revival in the 19th century. Priscilla is the feminine form of the English Priscus.

Priscilla is an all-time favorite. At present it is still rather popular as a baby girl name, but not to the degree it was before. The name increased in popularity from the 1900s up to the 1940s; prior to that, it was of only modest use. At the peak of its usage in 1940, 0.167% of baby girls were named Priscilla. It had a ranking of #127 then. The baby name has experienced a decline in frequency since then. In 2018, it ranked at #575 with a usage of 0.029%, but it was nevertheless the most commonly used out of all girl names in its family. 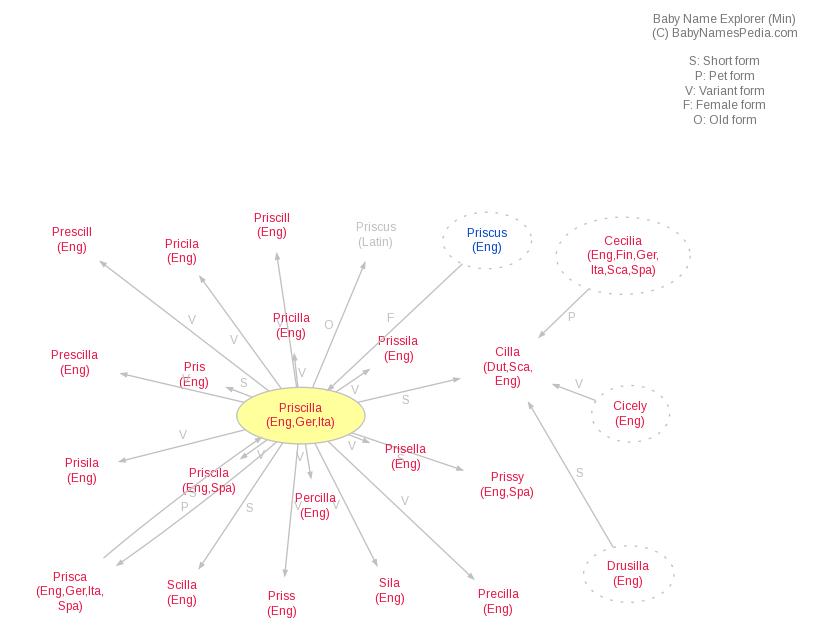