What does Purari mean?

[ 3 syll. pu-ra-ri, pur-ari ] The baby boy name Purari is pronounced PuwRaa-Rih- †. Purari's language of origin is Sanskrit and it is used largely in the Indian language. It is derived from the element puram which means 'city'. In Hindu mythology, Shiva destroyed three cities of demons, so he is also called Purari meaning 'the enemy of cities' or Tripurari meaning 'the meaning of three cities'.

Purari is not regularly used as a baby name for boys. It is not ranked within the top 1000 names. 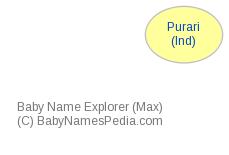