What does Qiana mean?

[ 3 syll. qia-na, qi-ana ] The baby girl name Qiana is pronounced as Kiy-AEN-aa- †. Qiana is largely used in English and it is also derived from English origins. The name is derived from Qiana, a silky nylon fiber introduced by DuPont in 1968. It was initially intended for high-end fashion, but it eventually became popular in the 1970s as faux-silk for men's shirts widely worn in discos. The fabric name was chosen from a computer-generated list, so the meaning was not known.

Qiana is an English spelling variant of the name Kiana (English and Hawaiian).

Qiana is also a variant transcription of the name Quiana (English).

Qiana is unusual as a baby girl name. Its usage peaked modestly in 1978 with 0.022% of baby girls being named Qiana. It was #507 in rank then. The baby name has experienced a substantial fall in popularity since then, and is now of sporadic use. In 2018, among the family of girl names directly related to Qiana, Kiana was the most frequently used. 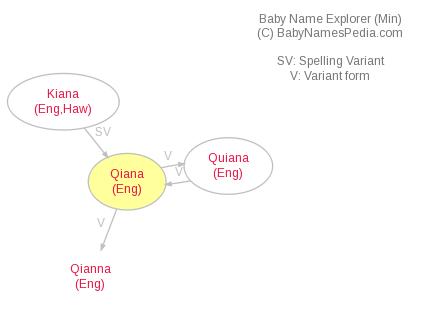