What does Quentin mean?

[ 2 syll. quen-tin, qu-ent-in ] The baby boy name Quentin is pronounced in English as KWEHN-TihN or in French as KWaoN-TEHN †. Quentin is largely used in the English and French languages, and it is derived from Latin origins. The name is of the meaning fifth-born son; born in fifth month. It is from the element 'quintus' which means fifth. The name is derived as the French form of the Roman given name Quintus (Latin) via its derivative, the Roman family name Quintinus (Latin). It was traditionally reserved for the fifth-born child, or a child born in the fifth month.

The name was borne by a 3rd-century saint in Gaul, who gave his name to the town of St Quentin in northern France where he was martyred. The name was introduced to England by the Normans, but it was not widely used in the Middle Ages. It was then known from the Flemish painter Quentin Matsys (1466-1529). The name saw a revival among English speakers in the 19th century, especially in Scotland where it was popularized by Sir Walter Scott's historical novel Quentin Durwood (1823). In Britain, the name was known from the British politician Quintin Hogg (1907-2001) and the British writer Quentin Crisp (1910-1999). In America, it was first made known by Quentin Roosevelt (1897-1918), the son of president Theodore Roosevelt who was killed during World War I. The name Quintana, the name Quintella (English), and the name Quintina (English) are the female equivalents of Quentin.

The name Quentin is used to a great extent; it has 29 variants that are used in English and other languages. Variants used in English include Q, Quantin, Quen, Quent, Quentan, Quente, Quentine, Quentun, Quentyn, Quientin, Quint, Quintan, Quinten, Quintus, Qwenten, Qwentin, and Qwenton. Other English forms include the contractions Quin and Quinn, and the variant spellings Quenten, Quenton, Quintin (used in German as well), and Quinton.

Quentin is fairly popular as a baby name for boys. The name jumped in popularity during the 1910s. Its usage peaked modestly in 1919 with 0.056% of baby boys being given the name Quentin. Its ranking then was #220. The baby name has since declined in popularity. In 2018, its usage was 0.026% and its ranking #545, but it was nonetheless the 2nd most popular after Quinn, among all boy names in its group. In 2018, it was 62% more popular than Quentin. 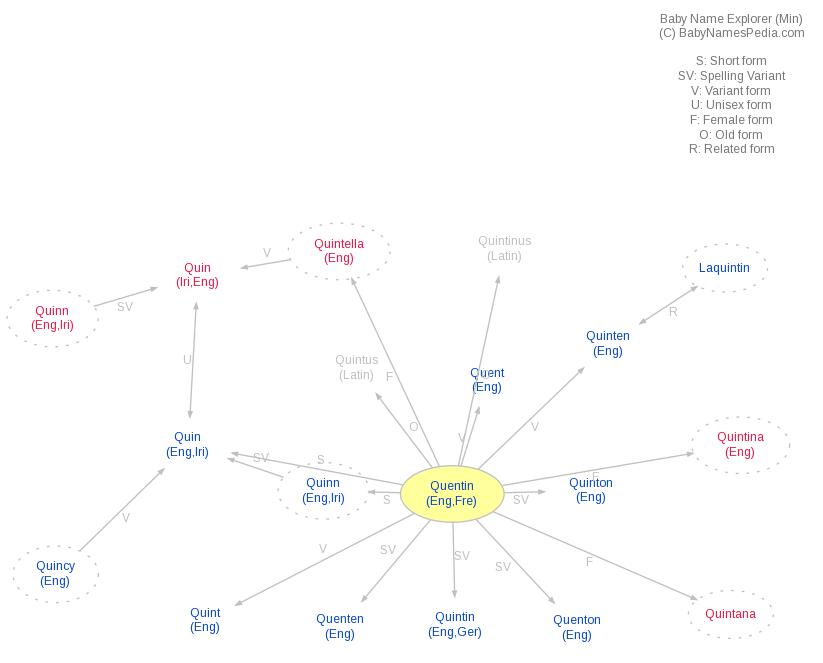