What does Quincy mean?

[ 2 syll. qui-(n)cy, qu-i-ncy ] The baby boy name Quincy is also used as a girl name, but it is much more common for boys. It is pronounced as KWIHNSiy- †. Quincy is used chiefly in the English language and its origin is Latin. The first name is derived from the surname, which was originally a Norman French baronial name of a family at Cuinchy, Normandy; the place name Cuinchy is itself derived from the Roman Quintus, which is from the element 'quintus'. In the US, the name has sometimes been bestowed in honor of the 6th US president John Quincy Adams (1767-1848), whose middle name may have been taken from his birthplace in Quincy, Massachusetts, or else from his maternal great-grandfather John Quincy.

Quincy is fairly popular as a baby name for boys. The name's popularity jumped from the 1950s up to the 1970s. Its usage peaked modestly in 1977 with 0.042% of baby boys being given the name Quincy. Its ranking then was #273. The baby name has since experienced a fall in popularity. In 2018, its usage was 0.022% and its ranking #618. Among the group of boy names directly linked to Quincy, Quinn was the most popular. In 2018, it was 92% more widely used than Quincy. Quincy has predominantly been a baby boy name in the past century. 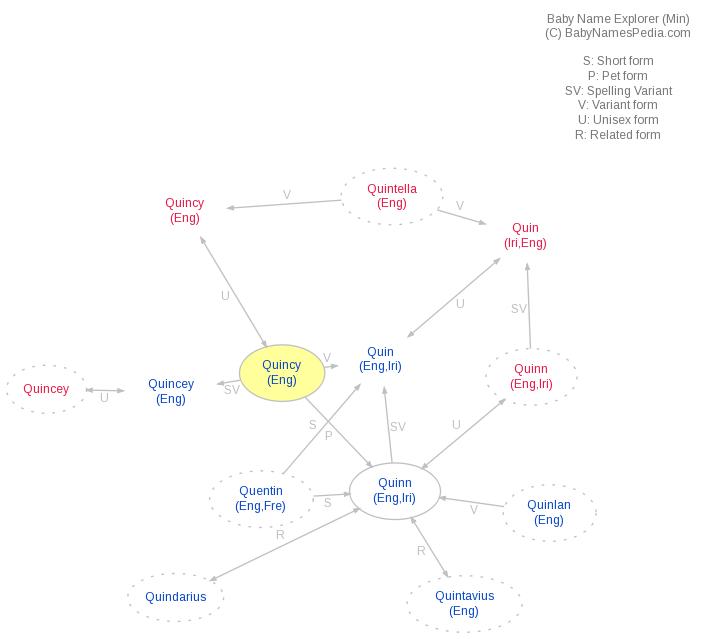