What does Rachelle mean?

[ 2 syll. rac-hel-le, ra-che-lle ] The baby girl name Rachelle is pronounced as Raa-SHEHL †. Rachelle is largely used in the English, French, and Italian languages. It is derived from Hebrew origins. This is a recent English coinage from Rachel under the influence of names such as Rochelle and Michelle.

Variant forms inherit the origin and meaning of Rachelle.

Rachelle is unusual as a baby girl name. Its usage peaked modestly in 1971 with 0.057% of baby girls being given the name Rachelle. It had a ranking of #285 then. The baby name has substantially declined in popularity since then, and is now of sporadic use. In 2018, among the family of girl names directly linked to Rachelle, Rachel was the most widely used. 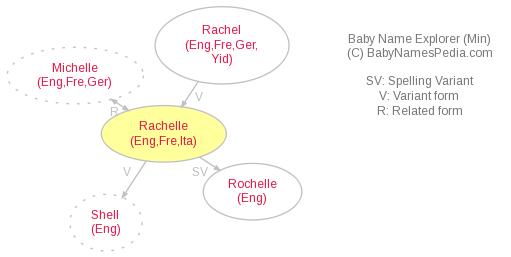