What does Raisa mean?

[ 3 syll. rai-sa, ra-isa ] The baby girl name Raisa is pronounced as Raa-IY-Saa- or Riy-IY-Z-ah †. Raisa has its origins in the Hebrew, Old Greek, and Latin languages. It is used largely in the English, Russian, and Yiddish languages. Old Greek origin: The name is either of the Old Greek rhadios (meaning 'adaptable, easy-going') or else the Yiddish raisa. It was borne by Raisa Gorbachev (1932-99), wife of the former Soviet leader Mikhail Gorbachev.

Raisa is also a variant of Rose (English and French) in the Russian language.

The name Raisa is used to a great extent; it has 25 variants that are used in English and foreign languages. Variants of the name used in English include Ra'eesa, Ra'isa, Raisabel, Raisi, Raisie, Raissah, Raisse, Raiza (used in Yiddish too), Raizi, Raizie, Rasa, Raysa, Raysah, Rayssa, Rayza, Rayzel, Rayzi, Rayzie, Rayzil, Razia, and Razil. The variant spelling Raissa (used in Russian too) is another English form. Raise (Yiddish) and Raizel (Yiddish) are foreign variants of Raisa. Another foreign variant is the familiar form Raya (Russian).

Raisa is irregularly used as a baby girl name. It is not listed in the top 1000. In 2018, among the family of girl names directly linked to Raisa, Rose was the most popular. 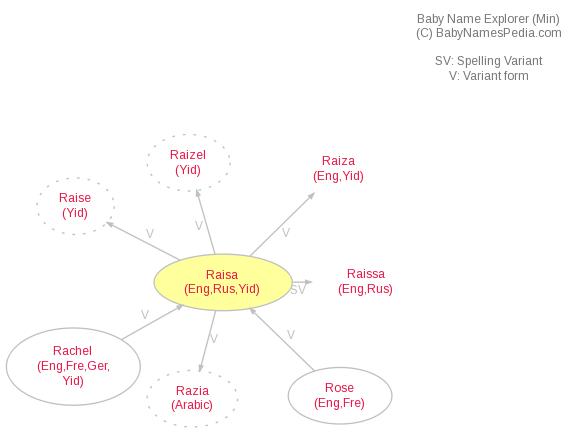