What does Ralph mean?

[ 1 syll. ral-(p)(h), ra-l-ph ] The baby boy name Ralph is pronounced in English as RAELF or REYF or in German as RAALF †. Ralph is used chiefly in the English and German languages, and its origin is Germanic. The name's meaning is wise and strong. A two-element name, it is from the elements 'rad' meaning counsel, advice ; 'wulf' wolf. Radolf (Germanic), Radulf (Germanic), Raedwulf (Old English), and Rathulfr (Old Norse) are original forms of Ralph. The old forms Radulf and Raedwulf existed before the Norman Conquest. Ralf developed as a short form of Radulf in the medieval times, when the forms Ralf and Rauf were most popular. In the 17th century Rafe was the most widely used, but it was overtaken by the modern form Ralph in the 18th century, the '-ph' spelling derived from Greek classical influence.

In addition, Ralph is a variant of the name Rudolph (English) in the German language.

The name Ralphina (English) is the female form of Ralph.

Ralph is a widely used name; it has 29 variants that are used in English and other languages. Variants used in English include Radolphus, Radulf, Rafe (used in Arabic as well), Raff, Raffy, Ralfe, Ralphe, Ralphea, Ralpheal, Ralphee, Ralphel, Ralphey, Ralphi, Ralphy, Ralston, Raoul (used in French and Spanish as well), Raul (used in French, German, Italian, and Spanish as well), Rolf (used in German as well), Rolfe, Rolle, Rolph, and Rolphe. The diminutive form Ralphie, and the variant spelling Ralf (used in German, Hungarian, and Scandinavian as well) are other English forms.

Ralph is a classic favorite. At present it is still somewhat popular as a baby name for boys, though to a lesser extent than it was in the past. Its usage peaked in 1921 with 0.778% of baby boys being given the name Ralph. It ranked at #23 then. The baby name has since markedly declined in popularity, and is in recent years of sporadic use. In 2018, its usage was only 0.011% and its ranking #951. Among the group of boy names directly linked to Ralph, Raul was the most frequently used. In 2018, the name was thrice as popular as Ralph. Ralph has mostly been a baby boy name, though in the past century it has also been used for girls. In 1929, the name Ralph was given to 137 times as many baby boys than girls. 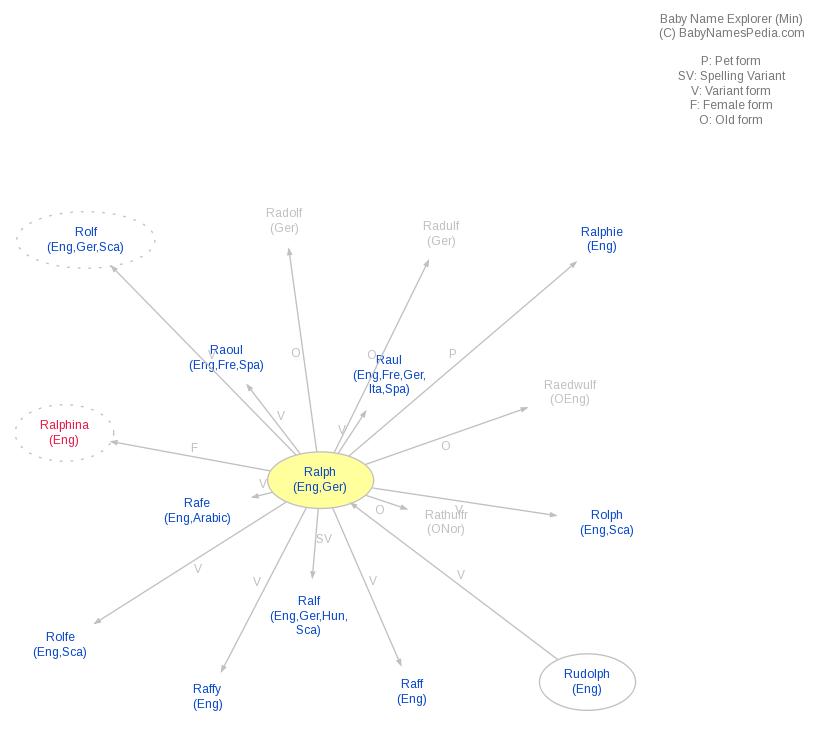