What does Ram mean?

[ 1 syll. ram, ra-m ] The baby boy name Ram is pronounced Raa-M †. Ram has its origins in the Hebrew and Sanskrit languages. It is used largely in Hebrew and Indian. Biblical name: From Hebrew roots, its meaning is 'exalted, supreme'. The name was borne by the second son of Hezron, a descendant of Judah in the Old Testament of the Bible.

Ram is a variant of Rama (Hebrew and Indian) in the Indian language.

Ram has 14 variants that are used in English and foreign languages. English variants of Ram include Rahm, Rahma, Rahmos, Rama, Rame, Ramee, Ramey, Rami, Ramie, Ramih, Ramm, Ramos, and Ramy. Ramone (Spanish) is a variant of the name that is used in foreign languages.

Ram is not often used as a baby boy name. It is listed outside of the top 1000. 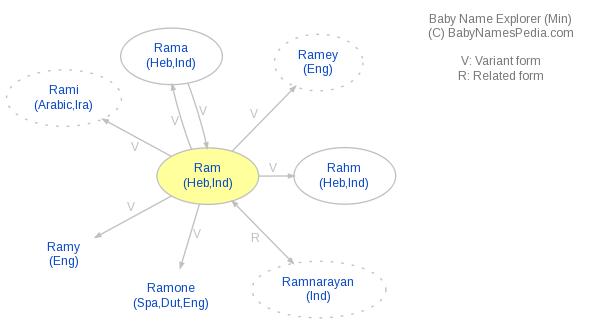