What does Ramiro mean?

[ 3 syll. ra-mi-ro, ram-iro ] The baby boy name Ramiro is pronounced as RaaMIH-R-ow- †. Ramiro is of Germanic origin. It is used mainly in the Basque, English, Italian, and Spanish languages. It is a two-element name derived from ragin + meri meaning 'counsel, advice' + 'great, famous' respectively. An original form of Ramiro is Ramirus (Latinized). The name was borne by 5th or 6th century Saint Ramirus, who was martyred by the Visigoths.

Ramiro is a widely used name; it has 22 variant forms that are used in English and foreign languages. Variant forms of the name used in English include Ramario, Rameer, Rameerez, Rameero, Rameir, Ramere, Rameriz, Ramero, Rameyro, Ramih, Ramires, Ramirez (used in Spanish as well), Ramos, Ramyrez, and Ramyro. The short form Rami is another English variant.

Ramiro is unusual as a baby boy name. Its usage peaked modestly in 2001 with 0.025% of baby boys being given the name Ramiro. It had a ranking of #456 then. The baby name has markedly fallen in popularity since then, and is of only sporadic use today. Among all boy names in its family, Ramiro was nonetheless the most frequently used in 2018. 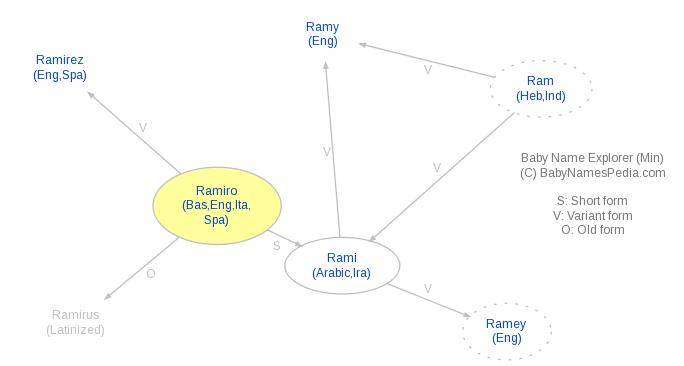