What does Randall mean?

[ 2 syll. ran-dal(l), ra-nda-ll ] The baby boy name Randall is sometimes used as a girl name. Its pronunciation is RAENDaeL †. Randall is used chiefly in the English language and its origin is Germanic. Randall is a variant of the name Randolph (English).

Randy (English short form) is a variant of Randall.

Randall is a classic favorite. At present it is still a somewhat popular baby name for boys, though not to the extent it was before. At the modest peak of its usage in 1960, 0.331% of baby boys were given the name Randall. Its ranking then was #59. The baby name has since suffered a steep loss in popularity, and it is of very light use in recent years. In 2018, its usage was only 0.011% and its ranking #997. Out of the group of boy names directly linked to Randall, Randy was the most widely used. In 2018, it was 79% more commonly used than Randall. In the past century Randall has predominantly been a baby boy name.

Baby names that sound like Randall include Randal (English), Randell (English), and Rondale. 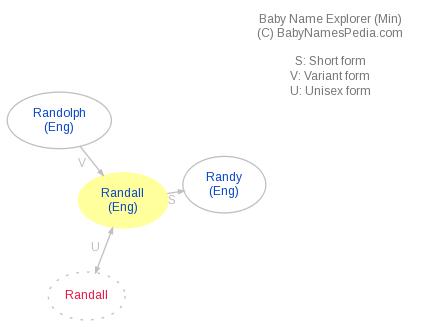