What does Randolph mean?

[ 2 syll. ran-dol-(p)(h), ra-ndo-lph ] The baby boy name Randolph is pronounced as RAENDuhLF †. Randolph is used predominantly in the English language and its origin is Germanic. The name's meaning is strong defender. It is derived from the elements 'rant' meaning shield edge ; 'wulf' wolf. Dolph (English), Dolphus (English), Randulfus (Latinized), Randwulf (Old English), and Rannulfr (Old Norse) are older forms of Randolph. The Domesday Book recorded the name as the Latinized Randulfus. The old forms of the name later gave rise to English forms such as Randall and Randel in the Middle Ages. The modern '-ph' altered spelling of the name developed during the revival of the name in the 19th century, amidst a vogue for Greek classical names. The term Randy has been used as a slang for a lecher in the US, but it has apparently not deterred the adoption of the name. The name Randi (English and Scandinavian) is the female version of Randolph.

Randolph is an uncommon baby name for boys. At the modest height of its usage in 1952, 0.092% of baby boys were given the name Randolph. It ranked at #154 then. The baby name has since steeply declined in popularity, and is currently of very light use. In 2018, within the group of boy names directly linked to Randolph, Randy was the most regularly used. 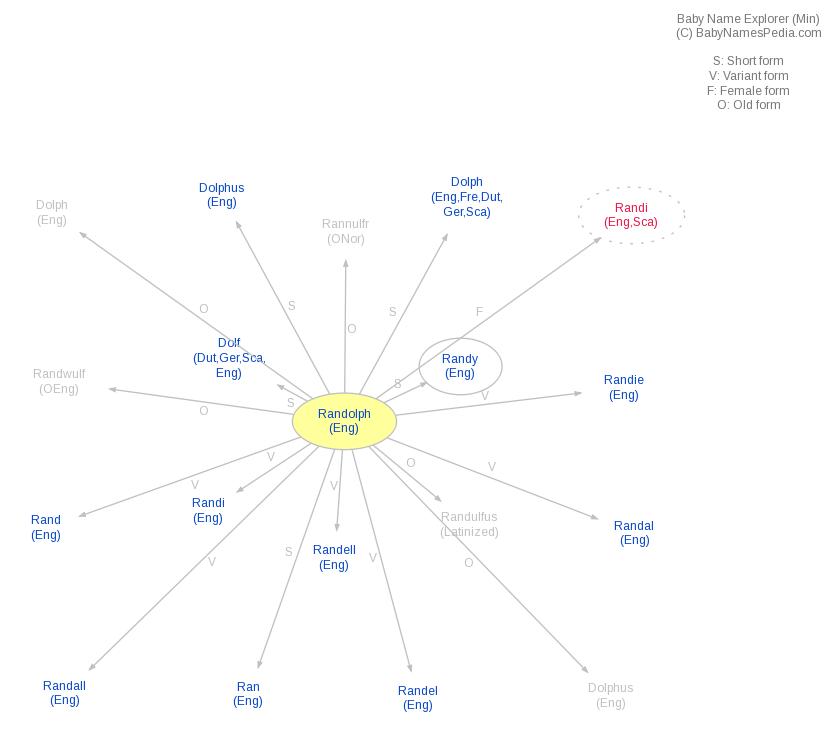