What does Raphael mean?

[ 3 syll. rap-hae(l), ra-pha-el ] The baby boy name Raphael is sometimes used as a girl name. Its pronunciation is RAEF-iy-ehL or REY-Fiy-ahL in English or Rae-Fae-EHL in French †. Raphael is used chiefly in the English, French, German, and Hebrew languages, and it is derived from Hebrew origins. The name is of the meaning God has healed. A biblical name, it is derived from the elements 'rapha' meaning to heal ; 'el' God, powerful. Rephael (Hebrew) is an older form of Raphael. The name was borne by one of the seven archangels who appeared in the apocryphal tale of Tobias but was not named in the Bible. The short form Rapha was borne by several minor Old Testament characters in the Bible. It was consequently a favorite among early Christians, but its medieval use was mainly Jewish, before its widespread adoption among English speakers by the 16th century. The name was borne by the famous Italian Renaissance painter and architect Raphael Sanzio (1483-1520). In Europe, the name has been more popular in the southern countries than in England. It later saw a modest revival at the end of the 19th century. The name Raphaela (English and German) is the female form of Raphael.

Raphael is a widely used name; it has 36 variants that are used in English and other languages. Variants used in English include Falito, Raf, Rafe, Rafello, Raffello, Raffi, Raph, Rapha, Raphaello, Raphale, Rapheal, Raphello, Raphie, Raphiel, and Ravel. The pet form Rafi is another English variant.

Raphael is fairly popular as a baby name for boys. The name's popularity has been increasing since the 1900s; before that, it was of irregular use only. At the modest height of its usage in 2017, 0.028% of baby boys were given the name Raphael. Its ranking then was #519. In 2018, its usage was 0.028% and its ranking #527. Within the group of boy names directly linked to Raphael, Rafael was the most commonly used. In 2018, the name was thrice as popular as Raphael. Raphael has in the past century been predominantly given to baby boys. 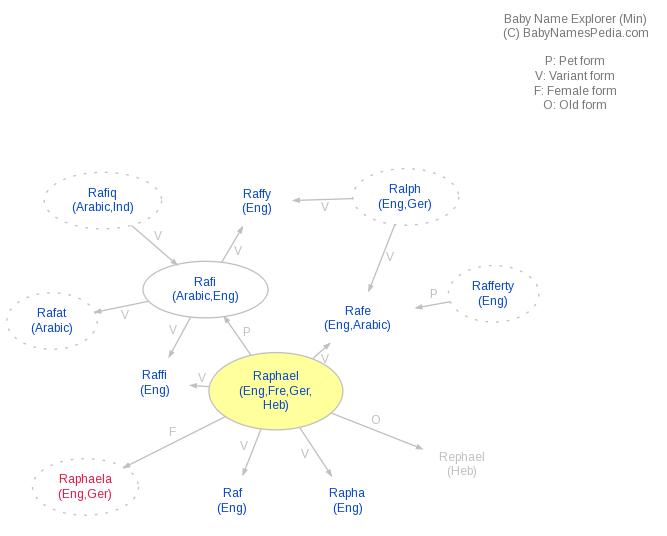