What does Ray mean?

[ 1 syll. ray, ra-y ] The baby boy name Ray is also used as a girl name, but it is much more common for boys. It is pronounced as Rey- †. Ray is used chiefly in the English language, and it is derived from English and Germanic origins.

Ray is a contraction of the name Rayburn.

Ray is also a contraction of the name Raymond (English and French) in the English language.

Ray is also a contraction of the name Rayner (English and German) in the English language.

Ray is a classic favorite. At present it is still somewhat popular as a baby name for boys, though it was in more widespread use in the past. Its usage peaked modestly in 1904 with 0.312% of baby boys being given the name Ray. Its ranking then was #55. The baby name has since experienced a substantial loss in popularity, and is of occasional use in recent years. In 2018, its usage was only 0.017% and its ranking #728. Among the group of boy names directly linked to Ray, Raymond was the most popular. In 2018, its use outnumbered Ray's by 4 times. Ray has predominantly been a baby boy name in the past century. In 1936, 47 times as many baby boys than girls were given the name Ray. 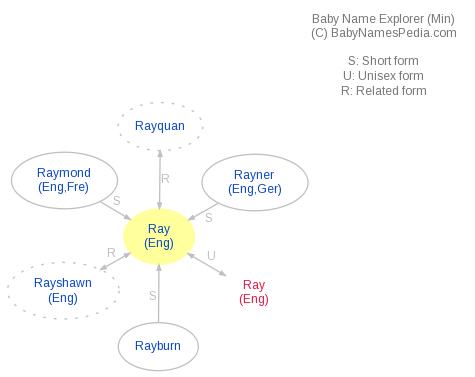