What does Rayne mean?

[ 1 syll. ray-ne, ra-yne ] The baby girl name Rayne is pronounced REY-N †. Rayne has its origins in the Germanic, Latin, and Spanish languages. It is used largely in the English, French, and Yiddish languages.

Rayne is a variant form of the Slavic, Czech, English, German, Polish, and Russian Raina in the English language.

Rayne is also a variant form of the Scandinavian Rane in the French and Yiddish languages.

Rayne is also a variant form of the German, Spanish, Italian, English, Japanese, and Yiddish Reina in the English language.

Rayne is somewhat popular as a baby girl name. The name has been rising in popularity since the 2010s. At the modest peak of its usage in 2018, 0.018% of baby girls were given the name Rayne. It had a ranking of #815 then. In 2018, out of the family of girl names directly linked to Rayne, Reina was the most regularly used. It was 37% more popular than Rayne in that year. 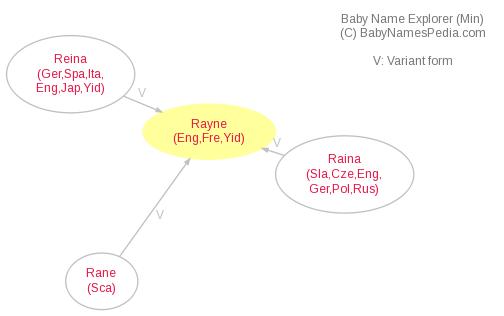