What does Rayshawn mean?

[ 2 syll. ray-(s)haw(n), ra-ysha-wn ] The baby boy name Rayshawn is pronounced as Rey-SHAAN †. Rayshawn is used chiefly in the English language and its origin is English-American. The name is from the combination of Ray and Shawn.

Rayshawn is a variant of the name Shawn (English and Irish) in the English language.

Variant forms share the origin and meaning of Rayshawn.

Rayshawn is unusual as a baby name for boys. Its usage peaked in 1995 with 0.006% of baby boys being given the name Rayshawn. It ranked at #980 then. The baby name has since experienced a fall in popularity, and is today of very modest use. In 2018, among the group of boy names directly linked to Rayshawn, Shawn was the most commonly used. 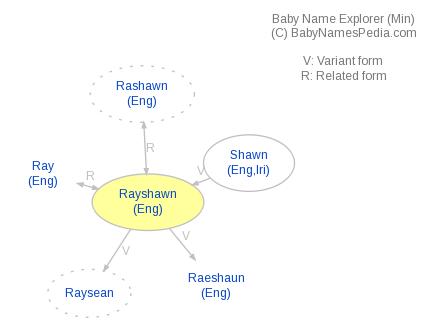