What does Reagan mean?

[ 2 syll. rea-gan, re-ag-an ] The baby boy name Reagan is also used as a girl name, with the latter form being much more common. It is pronounced as REY-GahN †. Reagan is used predominantly in the English and Irish languages, and it is derived from Celtic origins. It is from the element 'ri' which means king. The first name is derived from an Irish family name Ó Ríagáin, of the meaning 'descendant of Riagán'; Riagán is of the meaning 'little king' or 'impulsive'. Among Americans, the name has sometimes been bestowed in honor of the former president Ronald Reagan (1911-2004).

Reagan is unusual as a baby name for boys. Its usage peaked modestly in 2004 with 0.017% of baby boys being given the name Reagan. It ranked at #596 then. The baby name has since dropped out of favor, and is currently of irregular use. In 2018, among the group of boy names directly linked to Reagan, Reign was the most popular. Reagan has mostly been a girl name in the past century. In 2017, the name Reagan was given to 15 times as many girls than boys. 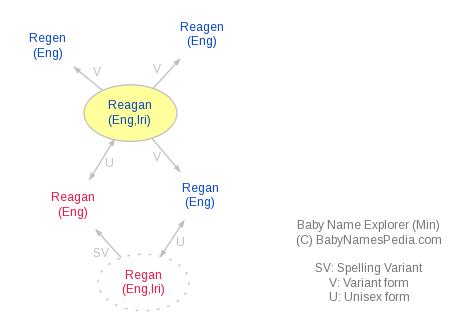