What does Rebecca mean?

[ 3 syll. re-bec-ca, reb-e-cca ] The baby girl name Rebecca is pronounced in English as Rah-BEHK-ah †. Rebecca's language of origin is Hebrew. It is predominantly used in English, French, and Italian. Rebekah (Hebrew) is an original form of the name. The name could be derived from the Hebrew element marbek, or else it could be from ribqah in reference to the bond of marriage. It could also be of Aramaic origin, as it was borne in the Old Testament of the Bible by the Aramean Rebecca, the wife of Isaac and mother of Jacob and Esau. The name has traiditionally been a favorite among Jews; it was widely adopted by English Puritans by the 16th century. The name was later popularized by the Daphne du Maurier novel Rebecca (1938), which was made into a successful film (1940). In Scotland, the name has been used as an Anglicization of the Gaelic Beathag.

Rebecca is an all-time favorite. At present it is still a popular baby girl name, but not as much as it was in the past. Its usage peaked in 1974 with 0.968% of baby girls being named Rebecca. It was #10 in rank then. The baby name has steeply dropped in popularity since then, and in recent times it is of only modest use. In 2018, it ranked at #214 with a usage of 0.078%, but it was nevertheless the most popular among all girl names in its family. Rebecca was used 4 times more than the next most popular name, Rebekah, in 2018. The name Rebecca has been primarily given to baby girls, although it has also been used as a boy name in the last century. In 1975, 207 times as many baby girls than boys were given the name Rebecca. 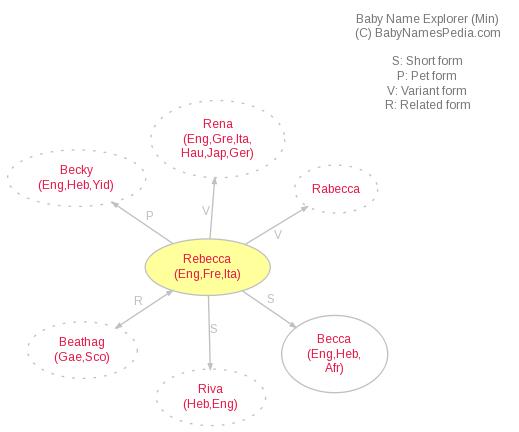