What does Reese mean?

[ 1 syll. ree-se, re-ese ] The baby girl name Reese is also used as a boy name, though it is more popular for girls. It is pronounced as RIY-Z †. Reese has its origins in the Welsh language and it is used largely in English. The name has in recent times been used as a female name in the US.

Reese is a form of the Welsh Rhys.

Reese is popular as a baby girl name. The name has been growing in popularity since the 1990s; prior to that, it was of only sporadic use. Its usage peaked modestly in 2012 with 0.127% of baby girls being named Reese. It was #128 in rank then. In 2018, it ranked at #159 with a usage of 0.097%, and it was the most frequently used among all girl names in its family. Although Reese is today more frequently used for baby girls, there was a period prior to 2002 when more boys were given the name. After 2003, increasingly the name became more popular with baby girls than with boys. In 2017, 5 times more baby girls than boys were given the name Reese. 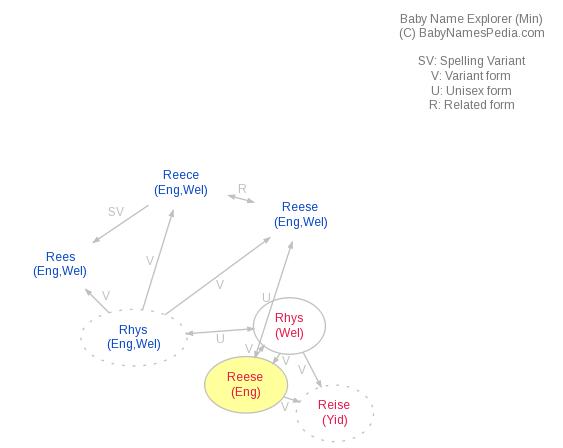