What does Refugio mean?

[ syll. re-fu-gio, ref-ug-io ] The baby girl name Refugio is pronounced REHFYUWiyow †. Refugio's origin, as well as its use, is in the Spanish language. Refugio is of the meaning 'refuge'. The first name is derived from Nuestra Señora de Refugio ('Our Lady of Refuge'), a title given by Spanish-speaking Roman Catholics to the Virgin Mary.

A variant transcription of Refugio is Refugia (Spanish).

Fucho (Spanish pet form) is another variant of the name.

Refugio is a seldom used baby name for girls. It is listed outside of the top 1000 names. Refugio has also been used as a baby boy name. 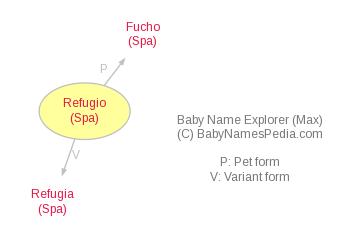