What does Regan mean?

[ 2 syll. re-gan, reg-an ] The baby girl name Regan is also used as a boy name, though it is more frequently a girl name. It is pronounced as REY-GaeN or RIY-GaeN †. Regan is of Celtic and Latin origin. It is used mainly in English and Irish. The name was first invented by Shakespeare for the treacherous second daughter of the king in his tragedy play King Lear (1603-1606); Shakespeare could have derived the name from an obscure Celtic source. Modern use of the name is often association with the surname Regan or Reagan.

In addition, Regan is an English form of the English, German, and Polish Regina.

Regan is unusual as a baby girl name. Its usage peaked modestly in 2001 with 0.038% of baby girls being named Regan. It had a ranking of #390 then. The baby name has experienced a marked decline in frequency since then, and is of only irregular use now. Among the family of girl names directly related to Regan, Reagan was the most commonly used in 2018. Although Regan is today more frequently used for baby girls, there was a period from 1960 to 1966 when more boys were given the name. After 1974, increasingly the name became more popular with baby girls than with boys. There were 3 times more baby girls than boys who were named Regan in 1979. 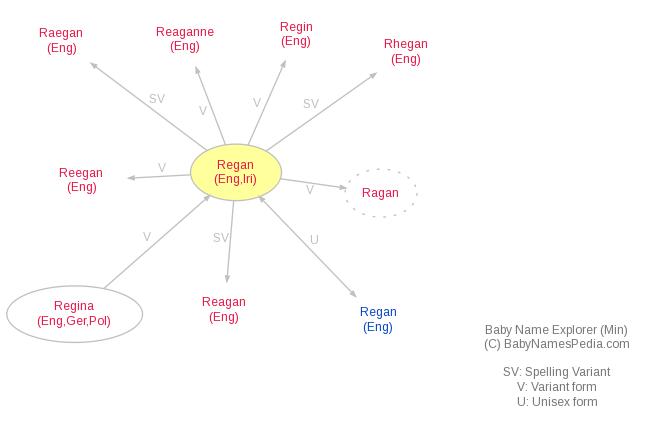