What does Reina mean?

Reina is used mostly in English, Japanese, Spanish, and Yiddish. It is of Spanish origin. It is literally from the word 'reina' which is of the meaning queen. The name is derived from the common Spanish word.

Reina has 17 derivatives that are used in English and other languages. English derivatives of Reina include Rainna, Rainy, Rayna, Rayne, Raynell, Raynette, Reia, Rein, Reine, Reinie, Reiny, Reiona, Renia, Reyna (used in Spanish too), Reyne, and Rheine. A derivative of the name used in other languages is the Irish Riona.

Reina's origin and use are both in the Yiddish language. It is derived from the element 'rein' which means pure, clean. The name is sometimes used as a Yiddish form of Katherine.

The Yiddish name Rayna is a variant form of Reina.

In addition, Reina is a derivative (German and Spanish) of the Slavic, Czech, English, German, Polish, and Russian name Raina.

Reina is also a contracted form (Italian and Spanish) of the English, German, and Polish name Regina.

Reina is a fairly popular baby name for girls. The name has been rising in popularity since the 2010s. At the modest peak of its usage in 2018, 0.025% of baby girls were given the name Reina. Its ranking then was #652. Out of all girl names in its group, Reina was the 3rd most popular after Regina and Reyna in 2018. Regina was 66% more commonly used than Reina in that year. 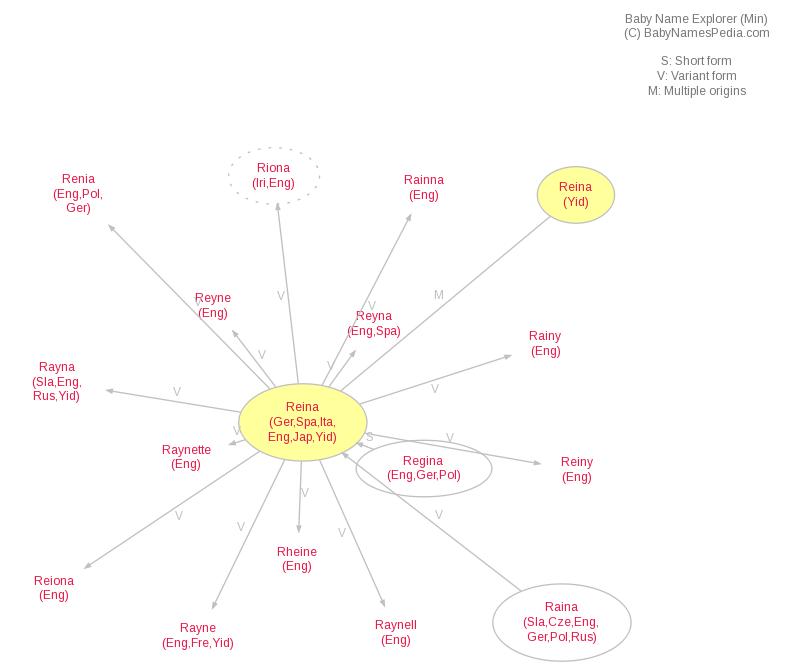