What does Reine mean?

[ 1 syll. rei-ne, re-ine ] The baby girl name Reine is also used as a boy name, though it is far more popular for girls. It is pronounced REH-N †. Reine has its origins in the Germanic, Latin, and Spanish languages. It is used largely in French.

Reine is a form of the Slavic, Czech, English, German, Polish, and Russian Raina.

Reine is also a form (French) of the English, German, and Polish Regina.

Reine is also a form of the German, Spanish, Italian, English, Japanese, and Yiddish Reina.

Reine is not commonly used as a baby girl name. It is not in the top 1000 names. In 2018, within the family of girl names directly related to Reine, Regina was the most frequently used. 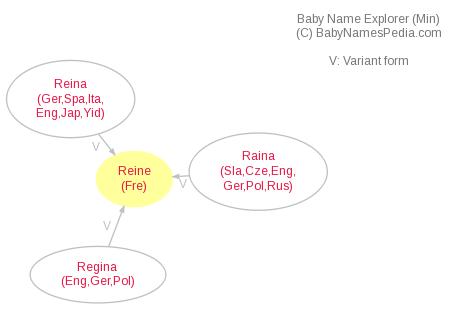