What does Reto mean?

[ 2 syll. re-to, ret-o ] The baby boy name Reto is pronounced as RIYTUW †. Reto is a German and Rhaeto-Romanic name of Latin origin. Retus (Latin) is an older form of Reto. It represents the transferred use of the geographic name as a given name. The name Reta (German, Rhaeto-Romanic, and English) is the female equivalent of Reto.

The name Retho (German and Rhaeto-Romanic) is a variant of Reto.

Variant forms inherit both the origin and meaning of Reto.

Reto is infrequently used as a baby name for boys. It is not listed in the top 1000 names. 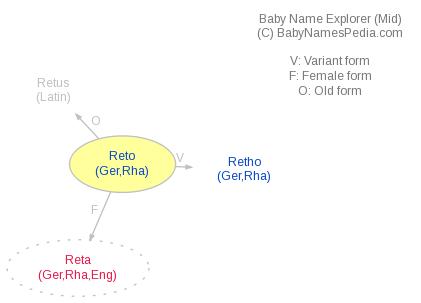