What does Reuben mean?

[ 2 syll. reu-ben, re-ub-en ] The baby boy name Reuben is pronounced as RUW-BahN in English †. Reuben is used predominantly in the English, French, German, and Hebrew languages, and it is derived from Hebrew origins. The name is of the meaning behold, a son. A biblical name, it is derived from the elements 'ra'ah' meaning to see ; 'ben' son. The name was borne in the Bible by the eldest son of Jacob and Leah, and thus the founder of one of the twelve tribes of Israel named after him. He was described as a son devoted to his mother, but for seducing his father's concubine, he was cursed by his father. Nevertheless, the name has long been popular among Jews, and it was taken up by English Puritans in the 17th century. It later saw a revival in the 19th century. The name Reubena (English) is the female version of Reuben.

Reuben is a widely used name; it has 28 variants that are used in English and other languages. Variants used in English include Re'uven, Reuban, Reubin, Reuhen, Reuven (also used in Hebrew), Rheuben, Rhuben, Rubea, Rubee, Rubey, Rubi, Rubie, Rubino, and Rueban. Other English forms include the short form Rube, the pet form Ruby, and the variant spellings Ruben (also used in Dutch, French, German, Hungarian, Italian, Scandinavian, Slavic, and Spanish), Rubin, and Rueben.

Reuben is a classic favorite. Today it is still somewhat popular as a baby name for boys, though it was in more widespread use previously. At the modest height of its usage in 1902, 0.062% of baby boys were given the name Reuben. Its ranking then was #198. The baby name has since fallen out of favor, and it is of infrequent use in recent years. In 2018, its usage was only 0.012% and its ranking #927. Within the group of boy names directly linked to Reuben, Ruben was the most popular. In 2018, the name was thrice as popular as Reuben. 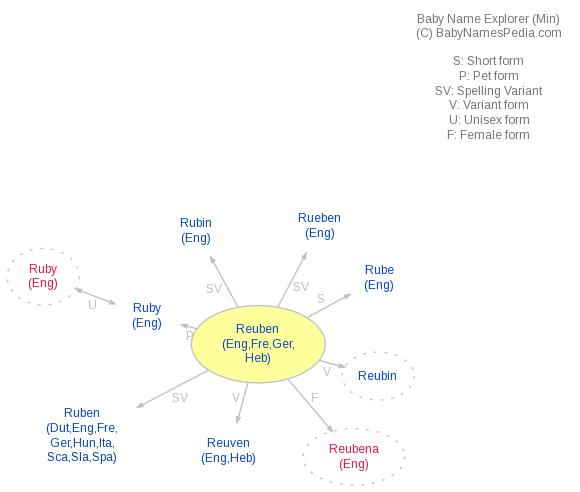