What does Rhea mean?

Rhea has its origins in the Old Greek language, and it is used largely in English, German, and Greek. Rheia (Old Greek) is an old form of the name. The name is of obscure meaning, possibly from rheo or rheos (meaning 'river, stream'). The name was borne in Greek mythology by the daughter of the Titans Uranus and Gaia. She became the mother of Zeus, Poseidon, Hades, Hera, Demeter, and Hestia, and consequently appeared as a prominent figure in various folk tales.

Rhea's language of origin is Latin. It is derived from the elements 'res' ; 'regnum' ; 'rea' which means poppy flower. The name could also be of Latin origin, possibly from the element 'res', 'regnum' or 'rea'. In Roman mythology, Rhea Silvia was the mother of the legendary founders of Rome, the twins Romulus and Remus. Another mythological Rhea was the priestess mother of Aventinus by Hercules.

The name Rea (Polish) is a variant transcription of Rhea.

Rhea is somewhat popular as a baby name for girls, and it is also regarded as trendy. At the modest peak of its usage in 1901, 0.023% of baby girls were named Rhea. It ranked at #387 then. The baby name has since suffered a substantial fall in popularity. In 2018, its usage was 0.019% and its ranking #761, enjoying a minor resurgence in the recent decade. Out of all girl names in its group, Rhea was the most commonly used. 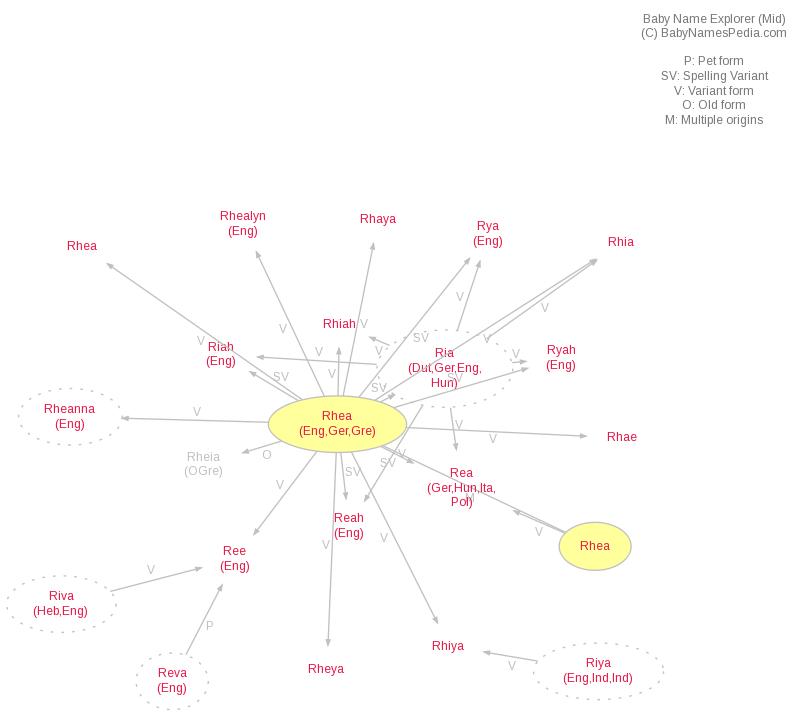