What does Rhett mean?

[ 1 syll. (r)het(t), rh-e-tt ] The baby boy name Rhett is sometimes used as a girl name. It is pronounced as RehT †. Rhett is used predominantly in the English language, and it is derived from Scandinavian and Welsh origins. Scandinavian origin: The name is of obscure derivation; it could be from the American surname, which is itself of the Dutch surname de Raedt, from the Middle Dutch 'raet'. It could also be of the Greek 'rhetor' or else a variant of the name Brett or Rhys, which have been around for longer. The name was invented for the leading man Rhett Butler in the Margaret Mitchell novel Gone with the Wind (1936), which was made into a film starring Clark Gable as the character. The success of the film gave a boost to the adoption of the name among English speakers.

Rhett is a variant (English) of the name Rhys (English and Welsh).

The name Rhetta (English) is the female version of Rhett.

Ret, Rett, Rhet, and Rhette are variants of Rhett.

Rhett is a popular baby name for boys, and it is also considered trendy. The name's popularity has been growing since the 1950s. Its usage peaked modestly in 2018 with 0.119% of baby boys being given the name Rhett. Its ranking then was #167. Among all boy names in its group, Rhett was the most popular in 2018. Rhett was used 4 times more than the next ranked name, Rhys, in that year. In the past century Rhett has predominantly been a baby boy name. 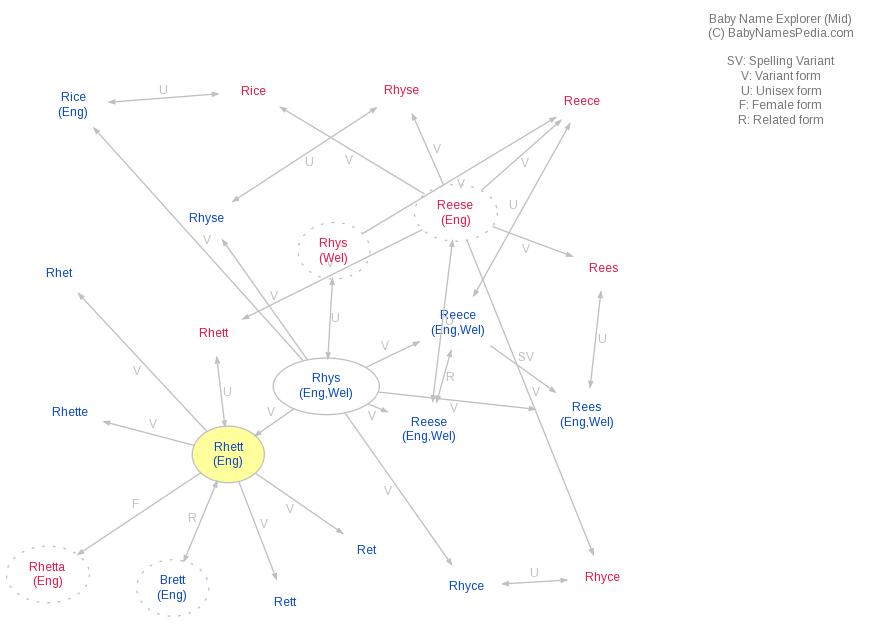