What does Rhiannon mean?

[ 3 syll. (r)hian-non, rh-iann-on ] The baby girl name Rhiannon is pronounced Riy-AEN-ahN or RIY-ahN-ahN in English or HHRih-AEN-aaN in Welsh †. Rhiannon's language of origin is Welsh, and it is used largely in the English and Welsh languages. It is derived from rigantona meaning 'great queen' ; rigan 'queen'. An original form of Rhiannon is Rigantona (Celtic). The Celtic rigantona was a royal title meaning 'great queen'. The name was borne in the Mabinogion of Welsh mythology by the horse goddess; she was also the daughter of Hefeydd the Old. It was first used as a given name in the 20th century, and popularized among English speakers by the Fleetwood Mac hit song Rhiannon (1976).

What are the Variant Forms of Rhiannon?

Rhiannon is uncommon as a baby name for girls. At the modest height of its usage in 1999, 0.034% of baby girls were given the name Rhiannon. Its ranking then was #423. The baby name has since dropped out of favor, and is used only on an infrequent scale today. Within all girl names in its group, Rhiannon was nonetheless the most popular in 2018. 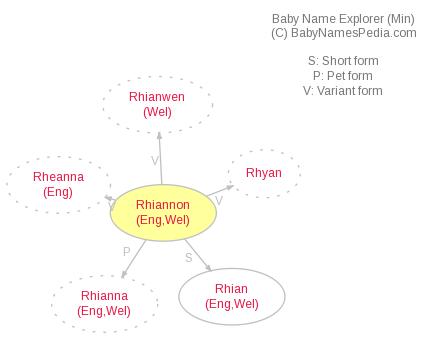