What does Rhonda mean?

[ 2 syll. (r)hon-da, rh-o-nda ] The baby girl name Rhonda is pronounced as RAAND-ah †. Rhonda is used mostly in English and Welsh, and its language of origin is Old Greek and Welsh. From Welsh roots, its meaning is good spear. The name was possibly coined in the 20th century from the Welsh elements 'rhon' (meaning spear, pike) and 'da' under the influence of similar names like Rhoda and Rhona. It has also often been associated with the Rhondda valley in South Wales, whose name is itself derived from the river name, and means 'noisy' from a different etymology. The name has also been popularized by the fame of the Welsh peeress and suffragette, Margaret Mackworth, 2nd Viscountess Rhondda (1883-1958). The economic woes of the Rhondda region since the 1960s may have contributed to the subsequent decline of the popularity of the name, especialy in the UK.

Rhonda is a derivative of the English name Rhoda.

Rhonda is an unusual baby name for girls. Its usage peaked in 1965 with 0.599% of baby girls being named Rhonda. Its ranking then was #37. The baby name has since steeply slipped in popularity, and is currently used on a very light scale. Among all girl names in its group, Rhonda was nevertheless the most popular in 2018. 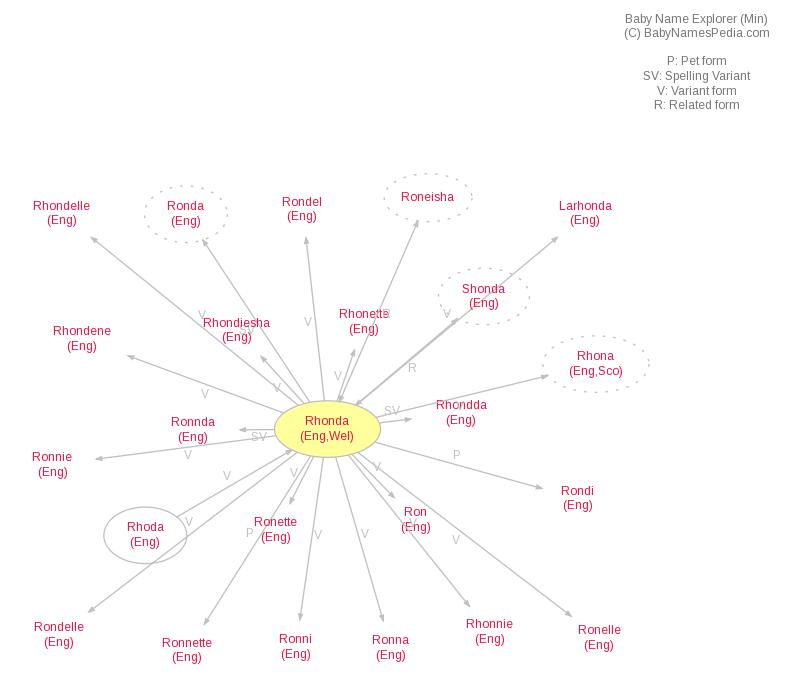