What does Rico mean?

[ 2 syll. ri-co, ric-o ] The baby boy name Rico is pronounced as RIY-Kow †. Rico has its origins in the Germanic language. It is used largely in Spanish and Italian.

Rico is a variant form of the English Frederick in the Spanish language.

A form of the name is the Italian and Spanish spelling variant Ricco.

Rico is unusual as a baby boy name. Its usage peaked in 1976 with 0.020% of baby boys being named Rico. It had a ranking of #432 then. The baby name has experienced a substantial decline in frequency since then, and is used only on a very modest scale today. In 2018, among the family of boy names directly related to Rico, Henry was the most widely used. 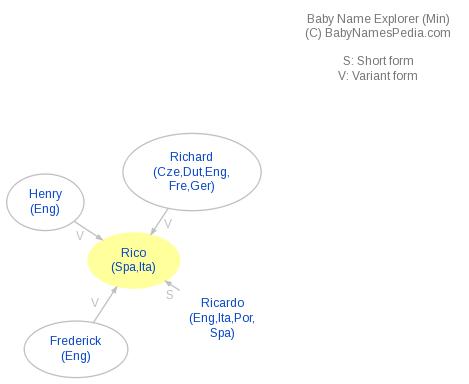