What does Riley mean?

[ 2 syll. ri-ley, ril-ey ] The baby boy name Riley is also used as a girl name, with the latter form being more common. Its pronunciation is RIYLiy- †. Riley is used chiefly in the English language and it is derived from Old English origins. The name is of the meaning rye field. The name is derived from the surname, itself from the English place name in Devon, Lancashire, and elsewhere; the place name is of the elements 'ryge' and 'leah' (meaning wood, clearing, meadow). In Ireland, the first name is sometimes derived from the surname Reilly, or else from the Old Irish personal name Raghallach.

Riley is popular as a baby name for boys. The name's popularity rose from the 1960s up to the 2000s. At the modest peak of its usage in 2006, 0.201% of baby boys were given the name Riley. Its ranking then was #101. The baby name has since fallen in popularity. In 2018, its usage was 0.075% and its ranking #250, but it was nonetheless the most commonly used out of all boy names in its group. Though Riley is more popular as a girl name today, there was a period before 2001 that it was given more often to boys. From 2002 on, increasingly more girls than boys were named Riley. In 2017, girls named Riley outnumbered boys by 5 times. 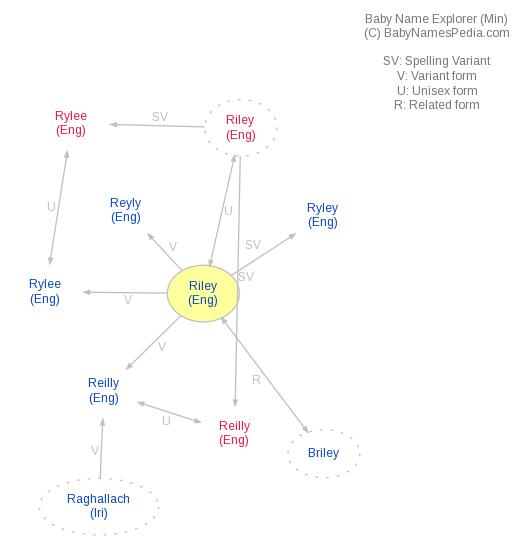