What does Robert mean?

[ 2 syll. ro-ber(t), rob-e-rt ] The baby boy name Robert is pronounced as RAA-BahRT in English, Row-BEHR in French, ROW-BehRT in German, RAO-BehRT in Polish, or ROW-BiyRT or ROW-BYehRT in Russian †. Robert is used predominantly in the Czech, Dutch, English, French, German, Hungarian, Scandinavian, and Scottish languages, and its origin is Germanic. The name is of the meaning bright famous one; famously famous. A two-element name, it is from the elements 'hruod' meaning fame ; 'berht' bright, famous. The name is derived via Norman French from Hrodeberht (Germanic), replacing the Anglo-Saxon Hreodbeorht (Old English). The name was popular in medieval Northern France, and it was introduced to England, notably by Robert the Magnificent (1000 - 1035), the father of William the Conqueror; he was often identified as the legendary Robert the Devil. The name appeared in the Domesday Book, and remained in regular use throughout the Middles Ages. It was borne by three kings of Scotland, notably Robert the Bruce (1274-1329), the King of the Scots who achieved independence from England for Scotland; the name has thus been popular in Scotland. Common medieval forms of the name such as the short forms Dob, Hob and Nob, are no longer in use. The name Roberta (English, German, and Italian) is the female version of Robert.

What are the Variant Forms of Robert?

Robert is a classic favorite. Today it is still popular as a baby name for boys, though it was in more widespread use previously. At the height of its usage in 1931, 5.659% of baby boys were given the name Robert. Its ranking then was #1. The baby name has since experienced a substantial loss in popularity, and is currently of occasional use. In 2018, its usage was only 0.267% and its ranking #71, but it was nonetheless the most popular within all boy names in its group. In 2018, Robert was more commonly used than the next most popular name, Roberto, by 8 times. The name Robert has predominantly been a baby boy name, though it has also been given to girls in the past century. In 1988, Robert as a baby boy name outnumbered its use as a girl name by 160 times. 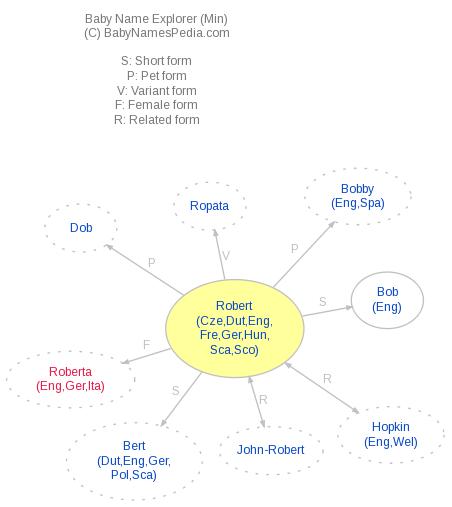