What does Rochelle mean?

[ 2 syll. roc-hel-le, ro-che-lle ] The baby girl name Rochelle is pronounced Raa-SH-EHL †. Rochelle is of Hebrew and Germanic origin. It is used mainly in English. Germanic origin: It is derived from rohon which means 'to roar, battle cry' ; hrok 'rest, repose'. The name developed as a feminine diminutive of the French Roch, or else it could be from the place name of the French fishing port of La Rochelle on the Atlantic coast. The name is not common in modern day France, but it is widely used among Afro-Americans, in which case it may be from a variant spelling of Rachelle.

In addition, Rochelle is a form of the English, French, German, and Yiddish Rachel.

Rochelle is also a spelling variant (English) of the English, French, and Italian Rachelle.

Rochelle is the feminine version of the English and Italian Rocco.

Rochelle has 22 forms that are used in English and foreign languages. English forms of the name include Reshelle, Richelle, Roch, Rochale, Rochella (used in Italian too), Rochette, Roschella, Roschelle, Roshel, Shelley, and Shelly. Other English forms include the spelling variants Rochel, Rochele, Rochell, Roshele, Roshell, Roshelle, Ruscelle, Rushell, and Rushelle. Forms used in foreign languages include the Latin Rochely and the Latin Roquelina.

Rochelle is rare as a baby girl name. At the modest peak of its usage in 1969, 0.072% of baby girls were named Rochelle. It had a ranking of #236 then. The baby name has suffered a marked decline in popularity since then, and is currently used only on an infrequent scale. Out of the family of girl names directly related to Rochelle, Rachel was the most widely used in 2018. 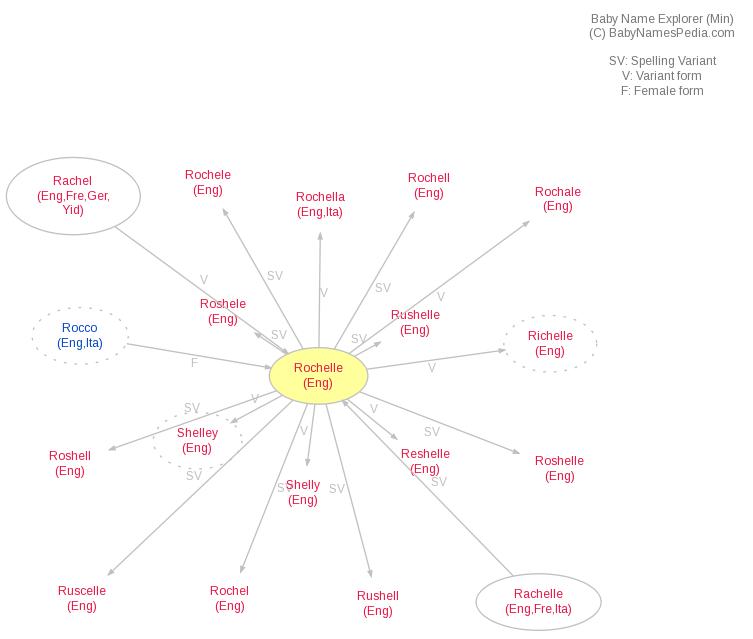