What does Roger mean?

[ 2 syll. ro-ger, rog-er ] The baby boy name Roger is pronounced RAA-JHahR (English) or Row-ZHEH (French) †. Roger has its origins in the Germanic language. It is used largely in the English, French, and German languages. The meaning of the name is 'famous warrior; famous spear'. It is a two-element name from hruod + ger meaning 'fame' + 'spear' respectively. The name is derived via Norman French from Old German. Hrodger (Germanic) was introduced by the Normans into England, replacing the native Hrothgar (Old English); the latter was borne by a legendary Danish king who was mentioned in Anglo-Saxon epics such as Beowulf and Widsith. As a Norman name, it was borne by the king of Sicily, Roger I (1031-1101) and his son Roger II (1095-1154). The Domesday Book recorded the name in the form Rogerus (Latinized).

The name remained popular in the Middle Ages, but it saw a drop in use from the 16th century from its peasant associations, as medieval diminutives like Hodge, Hodgekin, and Dodge became the typical names of agricultural labourers. These nicknames gave rise to various surnames that have survived to this day, but as diminutives they soon dropped out of use, leading in part to a revival of the name Roger in the 19th century. The name has traditionally been used in the term 'Jolly Roger' for the pirate's symbolic black flag with white skull and crossbones.

The name Roger is used to a great extent; it has 34 derivatives that are used in English and foreign languages. Derivatives of Roger used in English include Dodge, Hodge, Hodges, Raj, Rodgers, Rog, Rogelio (used in Spanish as well), Rogerick, Rogers, Rogiero, Rogir, Rojay, Rufiger, Rutger (used in Dutch and Scandinavian as well), Ruttger, and Rüdiger (used in German as well). The short form Rodge, the familiar form Rogie, and the variant spellings Rodger and Ronger are other English forms.

Roger is an all-time favorite. Today it is still rather popular as a baby boy name, but not as much as it was before. At the peak of its usage in 1945, 0.769% of baby boys were given the name Roger. It was #22 in rank then. The baby name has substantially fallen in popularity since then, and is of only modest use in recent years. In 2018, it ranked at #636 with a usage of 0.021%, but it was nonetheless the 2nd most popular after Rory, out of all boy names in its family. The name was twice as popular as Roger in 2018. 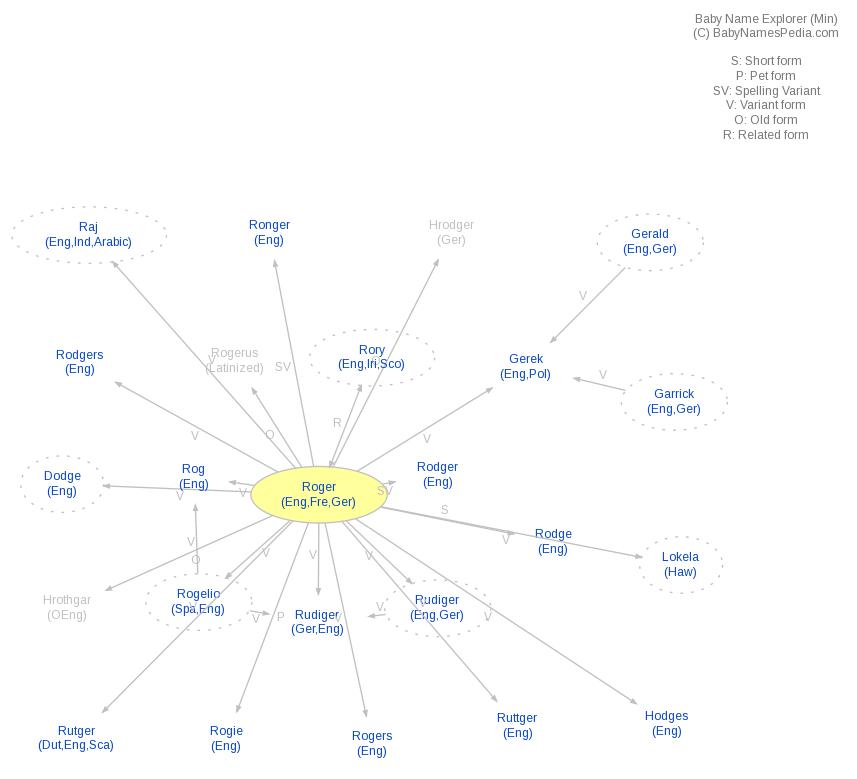